The highs and lows of becoming a first time school mum. 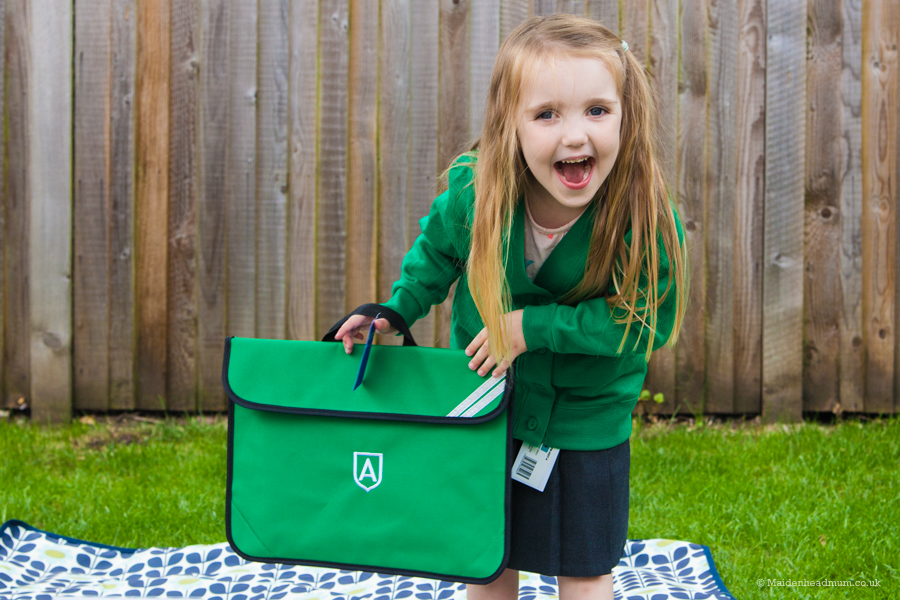 Having watched my Facebook feed fill up with images of my friend’s children starting school, I’ve never really been able to fully understand the range of emotions that lie behind the clichéd ‘stand in front of the fireplace’ photo that you see. As a first time school mum I’ve now realised that it isn’t just a photo. It’s a turning point, a moment of huge significance. Or at least that’s how it seems to me this year!

Perhaps when it’s the second, third, fourth year that you’re doing it you’re just excited to let them get back to school routine after what seems like endless holidays. Perhaps in 12 months time that will be me. I’ll be relieved to have survived the summer, but looking forward to getting back to ‘normal’. But this year it’s different. This is the first year that I’ll become a School Mum. The first time that I’ll succumb to this roller coaster of emotions that has been playing out since her 4th birthday. Emotions that swing from a high of being so, so proud of the Little Lady and grinning as I think of the fun she will have… to the lows of panicking about the tiniest details. I find myself worrying whether she will eat the snacks that school provides or whether she will be able to do the buttons up on her dress without screaming out ‘uhhhhh I can’t do it!”. 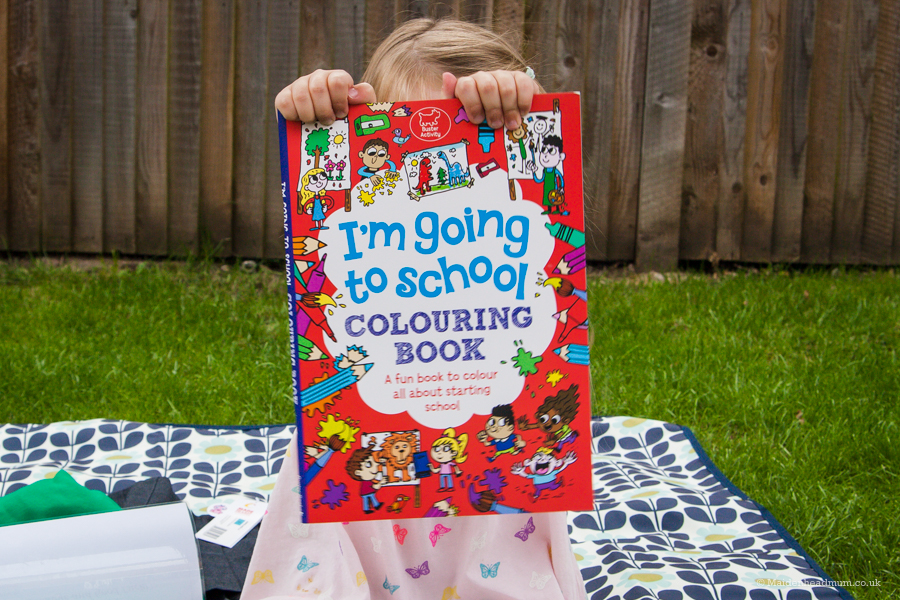 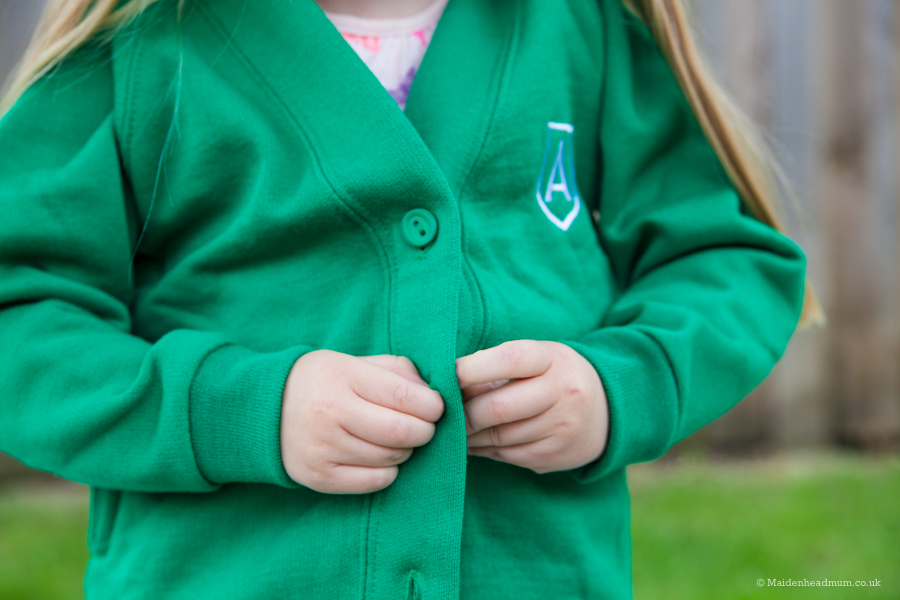 We’ve tried on the uniform. We added labels to everything. We’re ready.

Somedays, when I least expect it, I get an even bigger rush of emotion as I mourn for things that are coming to an end. The last time that we went to her little brother’s weekly Hartbeeps class as a ‘threesome’ and listened to her sweet little voice sing along to the songs that she’s known since being a baby. The last Monday of climbing and jumping around at the Playgym with her little brother following her excitedly. And of course the last day that she went to her nursery and had hugs from all the lovely teachers and carers that have been such a significant part of her early years. 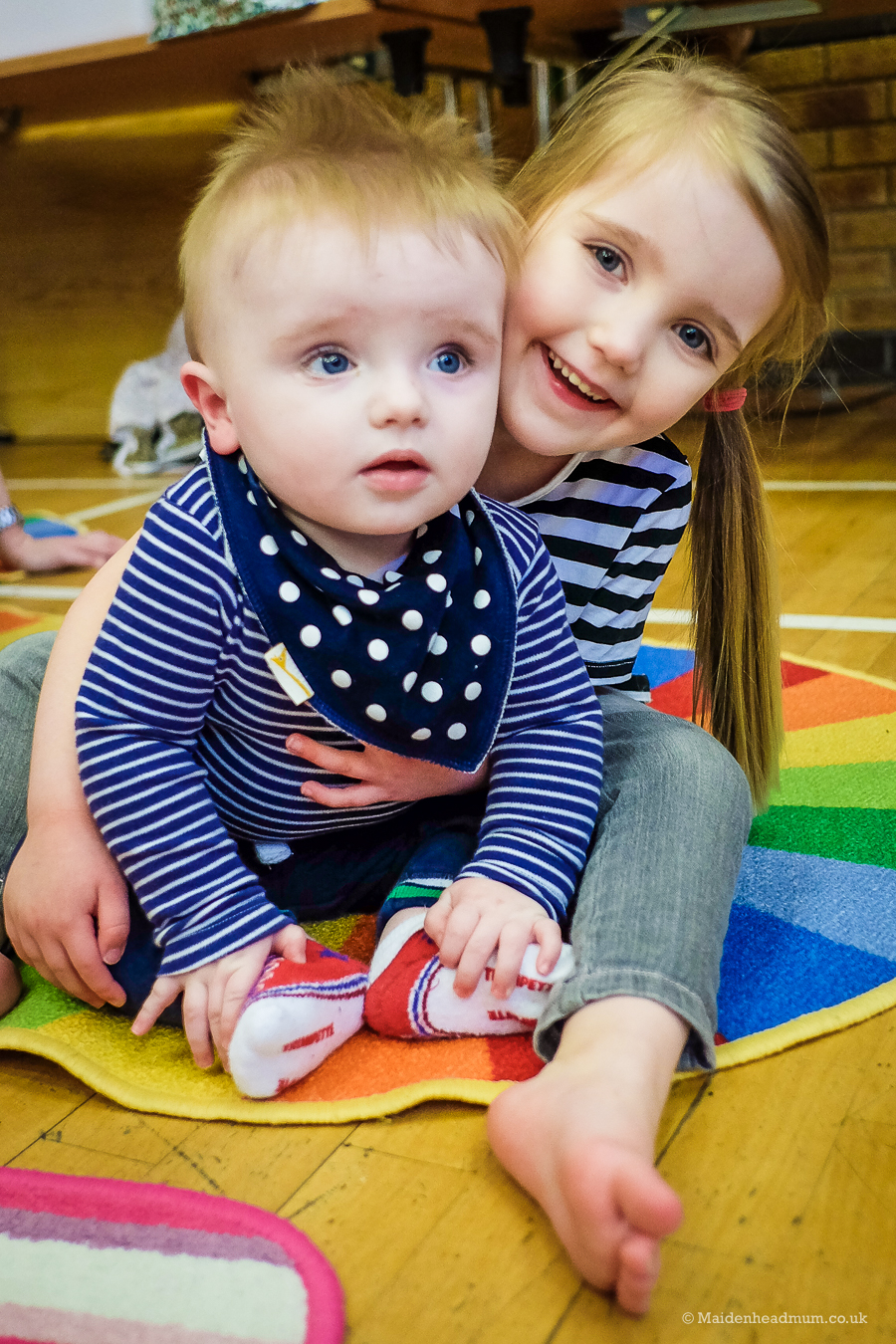 It’s been lovely having a little ‘helper’ at the Hartbeep’s classes. 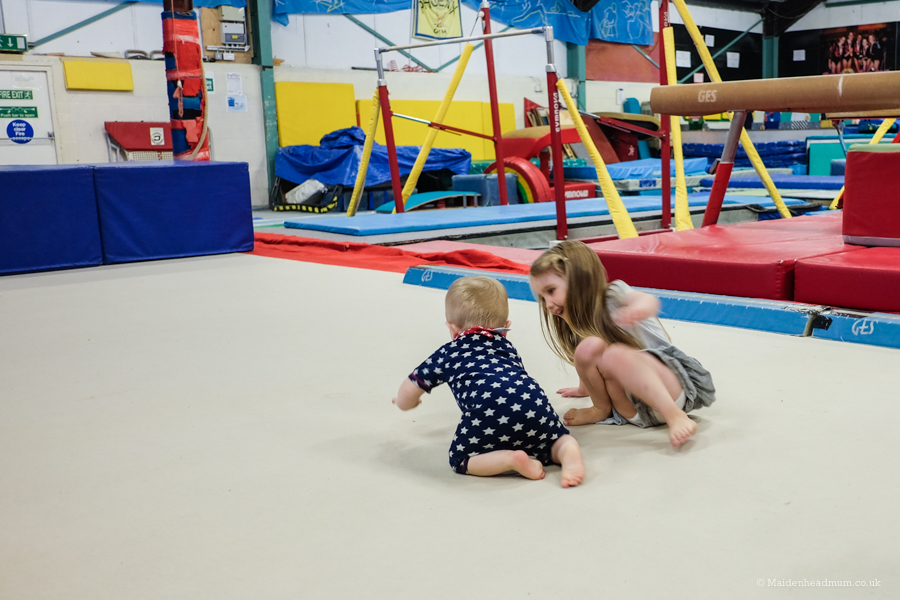 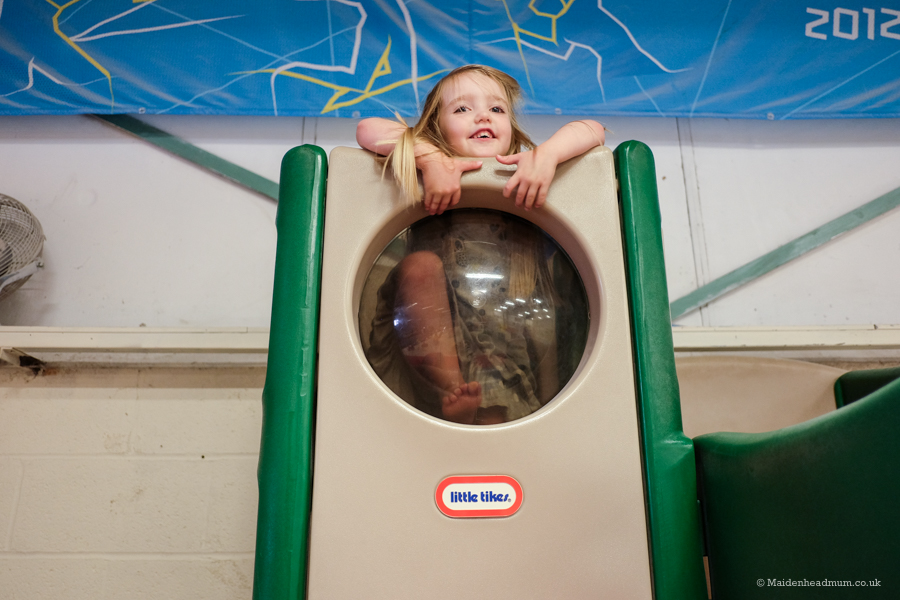 Climbing and keeping an eye on her little brother. He will miss her company midweek for sure!

The excitement of her ‘Gradulation Day’ (that’s how she says it!) 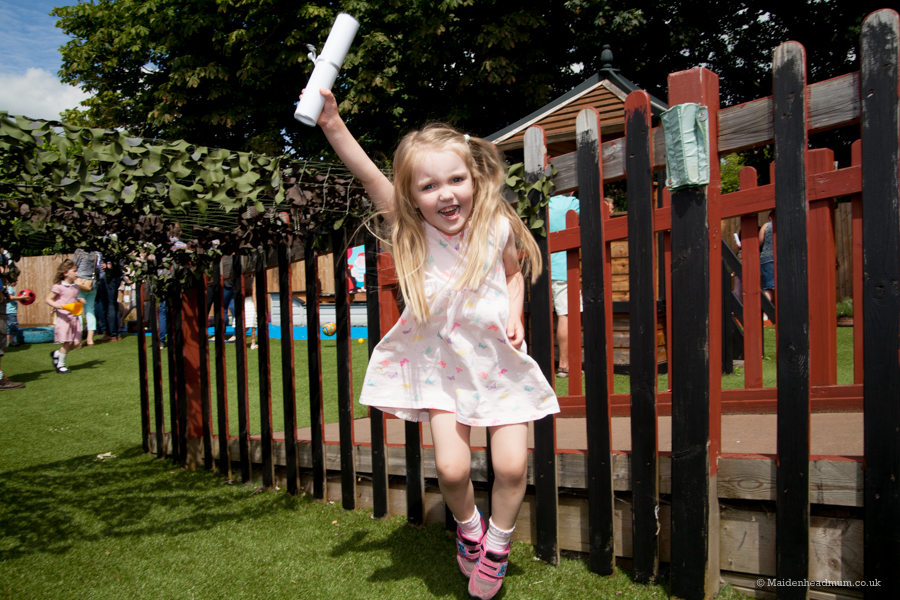 Jumping for joy at the thought of going to her new school.

But a funny thing has happened. Whenever I’ve felt sad and emotional about these things, there has been an equally unexpected flash of fearlessness that has sprung into our lives. It’s as if her subconscious is trying to remind me that she is about to embark on the biggest adventure of her life and that she’s ready for it. 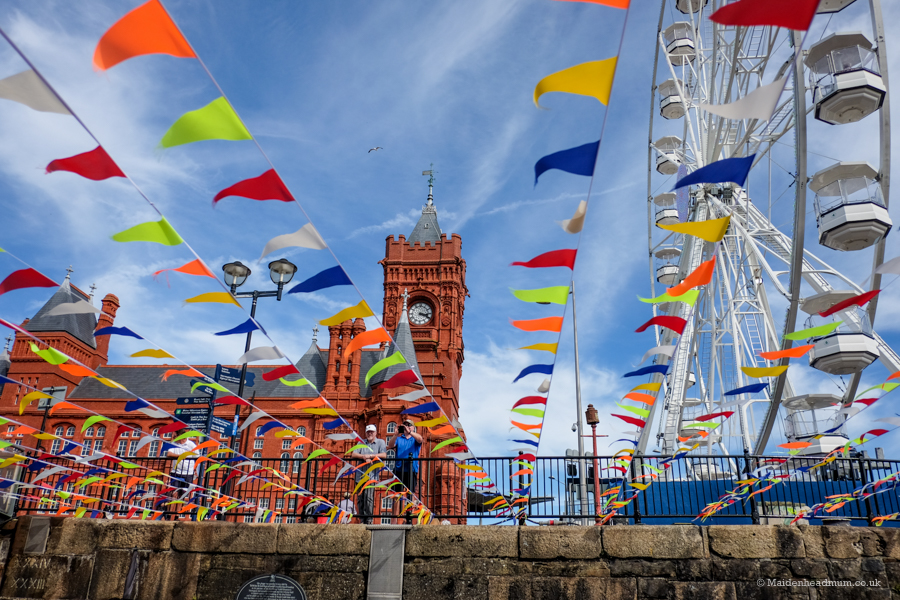 The Big Wheel in Cardiff as part of the summer activities.

I’ve marvelled as I’ve watched her conquer her fear of heights to go on the Big Wheel in Cardiff. The same one that just 7 months ago she cried and screamed about going onto, tears for her own fears and tears of fear about me. For months after, she talked about how she didn’t want me to go up so high as she was so scared for me. Yet this summer as she spotted the Big Wheel on the horizon she announced she was going to go on it. There had been no pre-amble from us. No suggestions of being brave, or ‘having a go’ and there were no small promises of treats or stickers. Nope, just off-the-cuff fearlessness. She was going up on the Big Wheel. Twice! 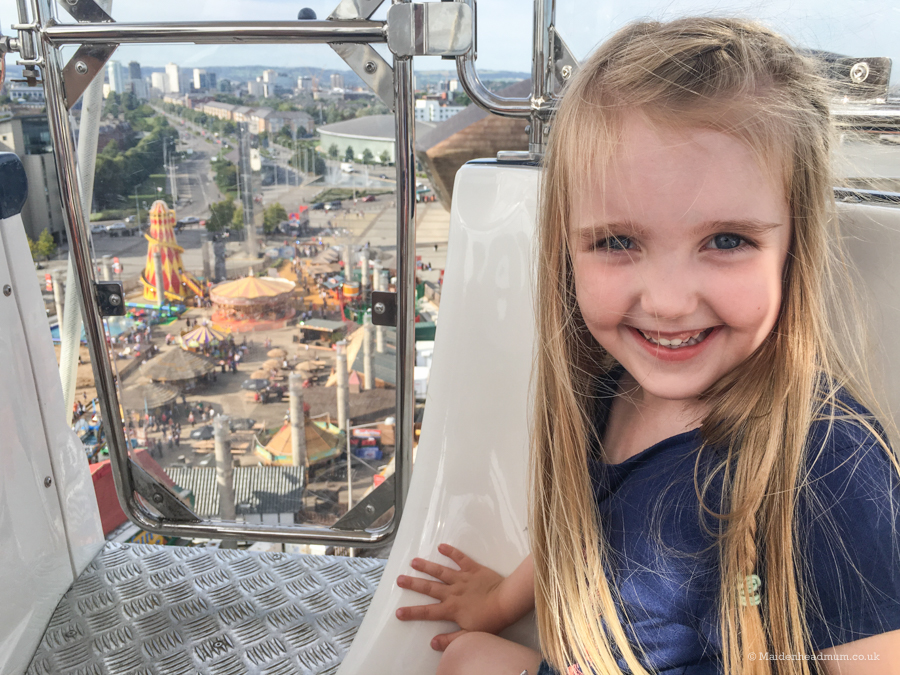 Chuffed to bits and posing for a photograph to show Daddy how brave she had been. 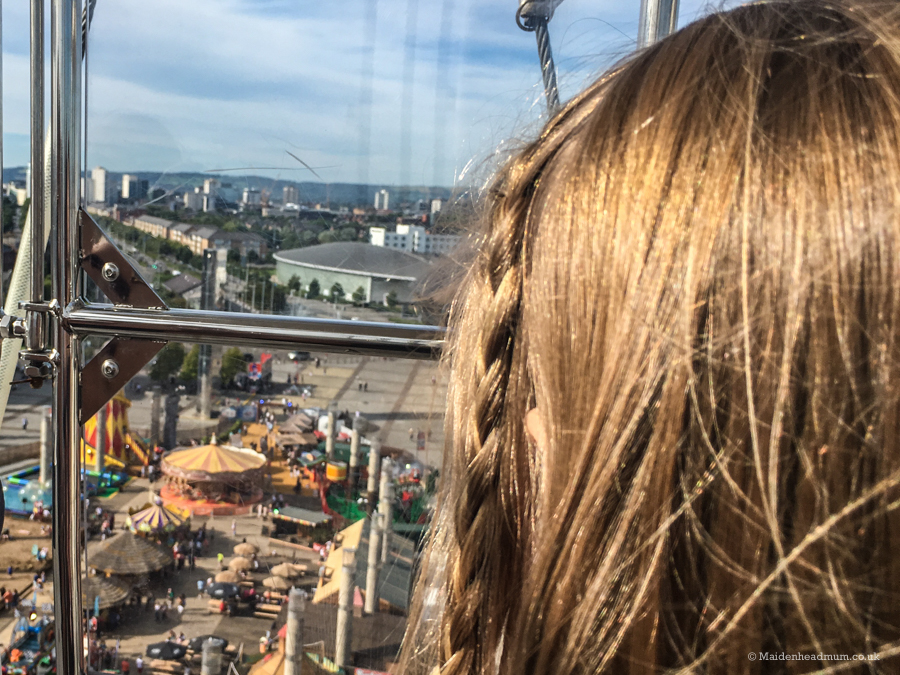 “I can see the WHOLE world’! So lovely to see her excitement.

But it didn’t just stop there. I was amazed when she announced that she was going to go on a horse on the beach! A horse?! She’s steadfastly refused to go anywhere near a donkey the last time we visited. But there was no calling her bluff this time, she went for it. Even when they said she was too small to go on a horse, she was still happy to go on a donkey and beamed from ear to ear as they rode across the sand with the sun on her face and the wind in her hair. 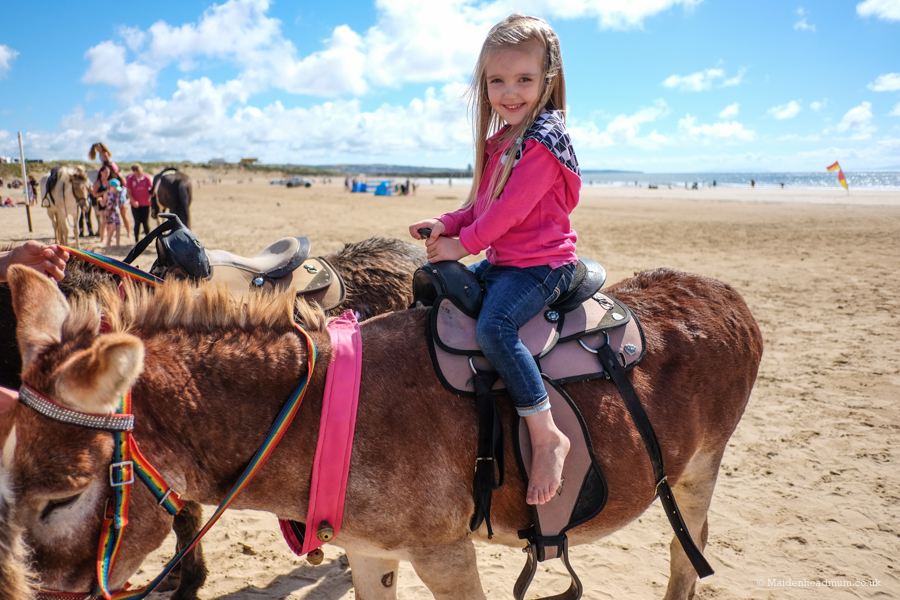 Her first time on a four-legged creature. She was so calm and so excited, all at the same time! 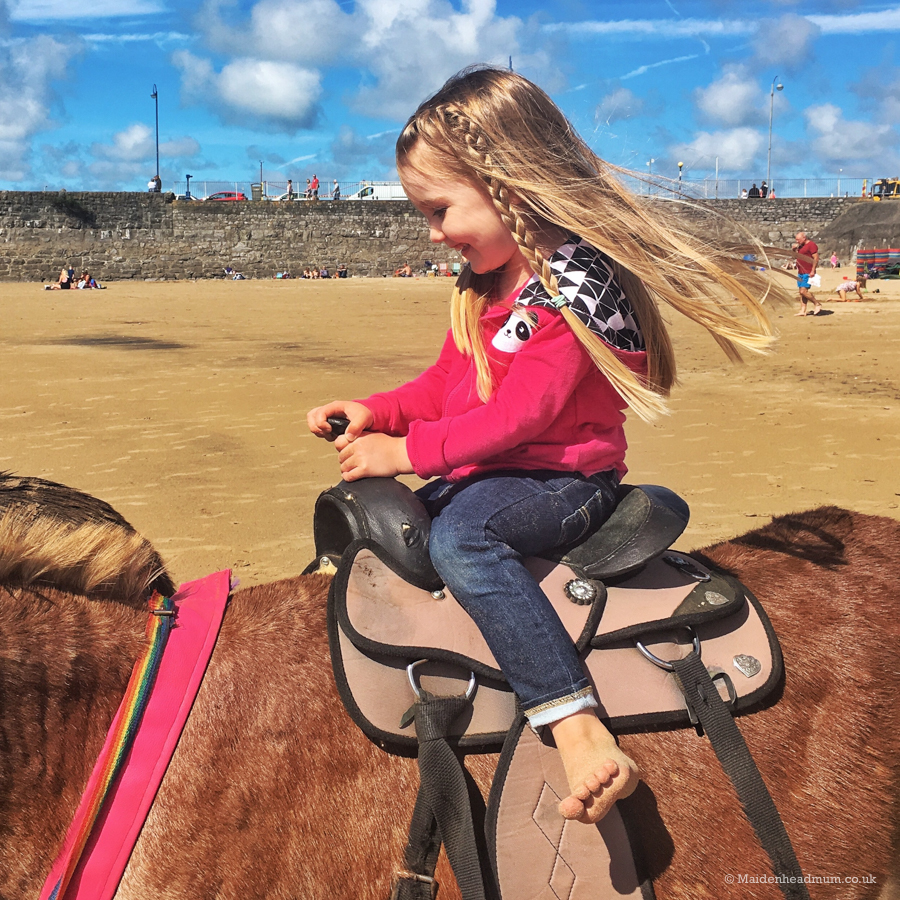 I loved watching her ride the donkey. Sunshine, bare feet, the wind in her hair. It was lovely and timeless.

Last week her fearlessness continued as we had a sudden change of heart about going to the hairdressers despite months, if not years, of saying that she was too scared – that having her hair cut would hurt or that it would turn her into a boy! I watched from the sidelines as my little pre-schooler transformed into a very grown up Little Lady, sipping a drink, looking at Vogue and having her hair washed, cut and blow dried! Just a few weeks ago I would have thought it impossible that she’d ever agree to do it! 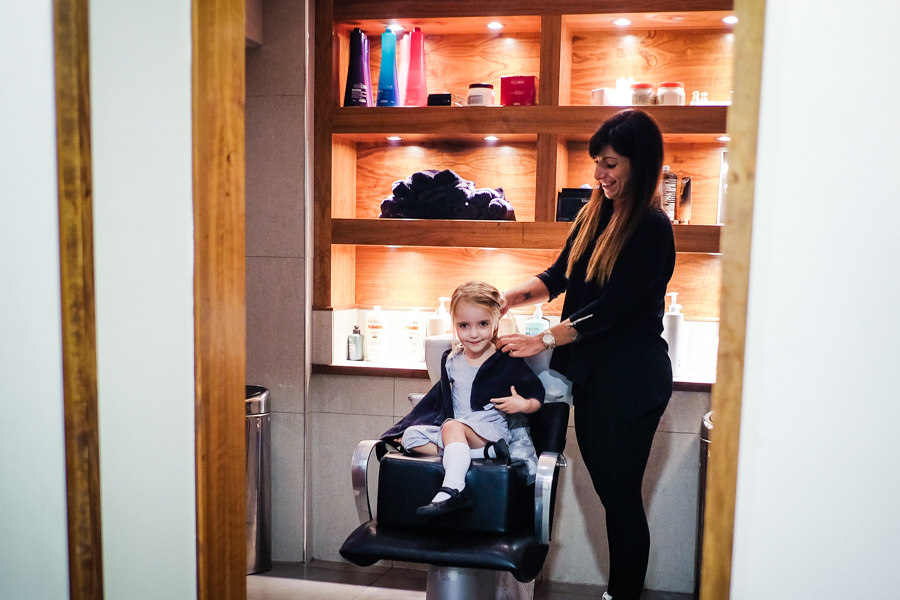 Being brave enough to go and have her hair washed in a ‘grown-up’ chair all on her own. (Apart from ‘Paparazzi Mum’ sneaking around the corner!) 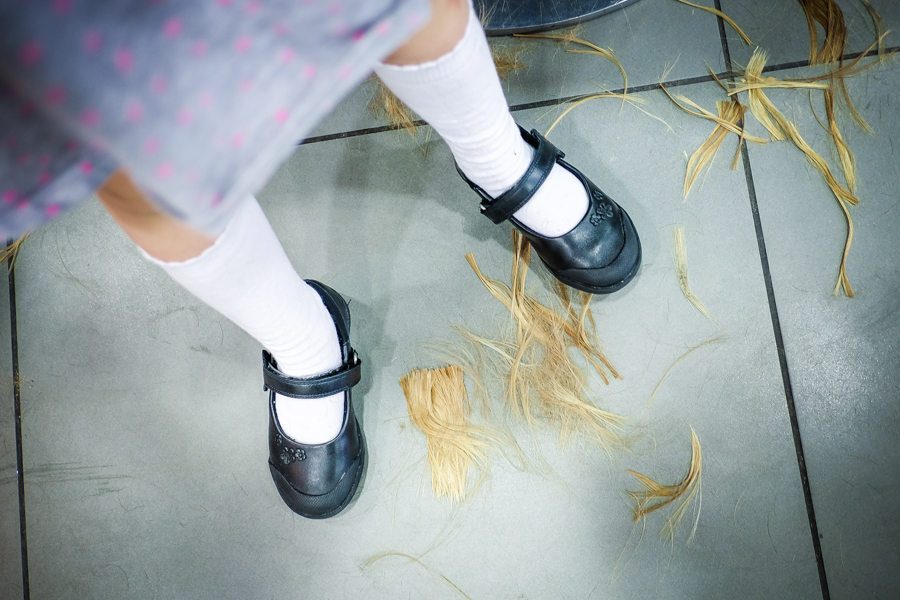 Bye- bye long, long hair. Hello smart new hair, ready for starting school. Wearing her school shoes that she ADORES. She took them to bed with her the first night!

What a grown up Little Lady sat in front of me!

And it keeps on happening. This morning I watched as she sat on the side of the pool at her swimming lesson, sobbing that she wanted to go home, it was too deep, she didn’t like it, she needed a cuddle. So hard to see her so upset. Yet she still got into the pool and swam across. So proud of her for having a go. 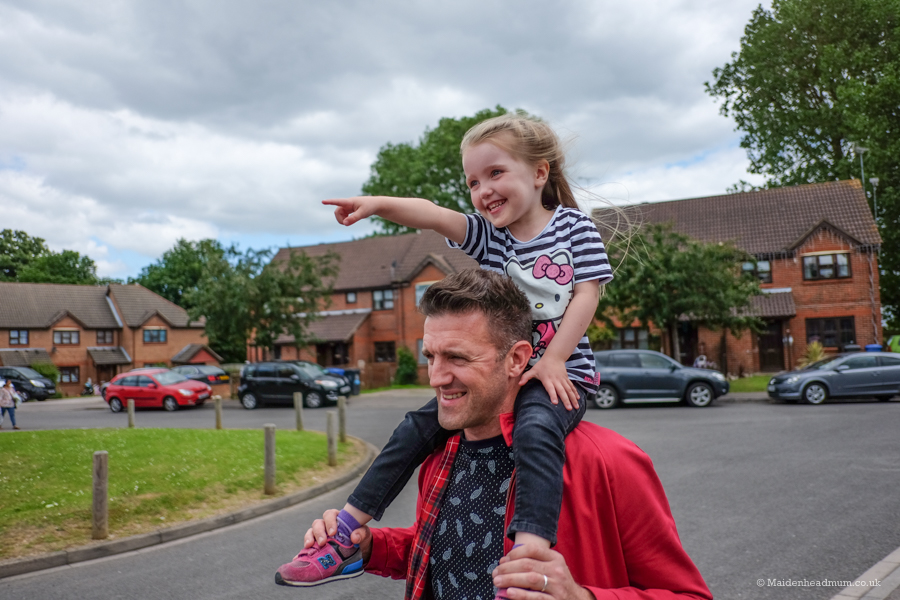 Her sheer joy on the way to her settling in session at school. This was the first time she’d ever seen the school and she just couldn’t wait! 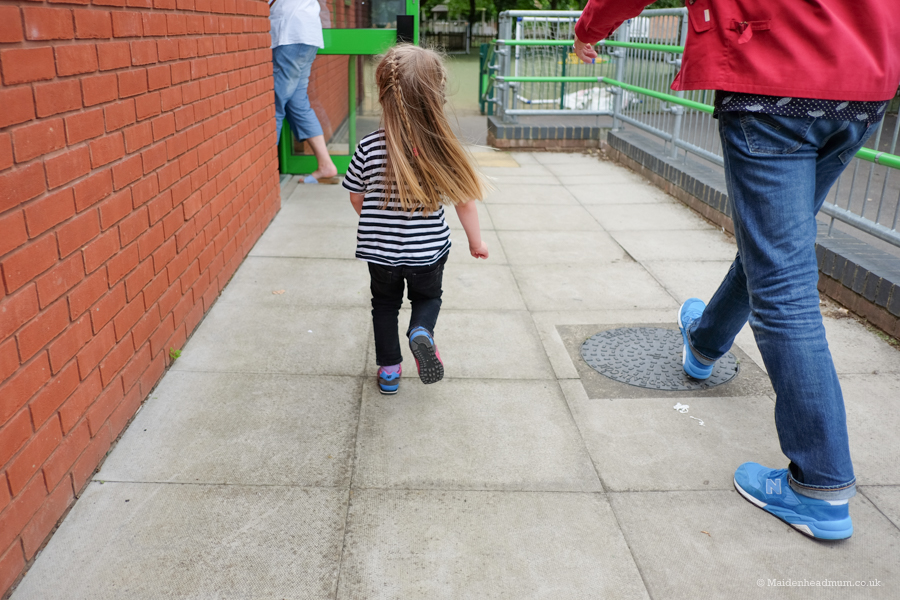 We thought we might need to hold her hands and stay close by on the first visit but she literally skipped on in! 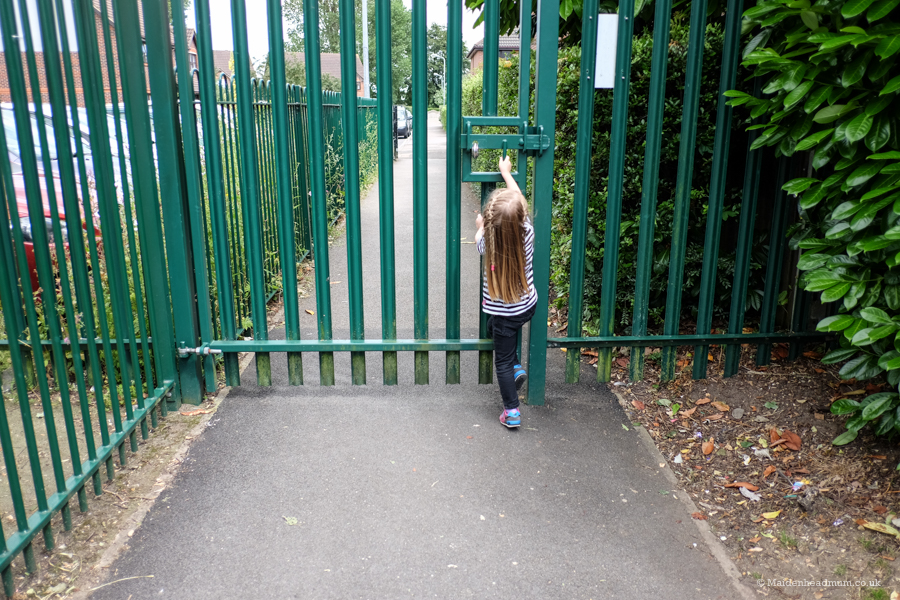 She enjoyed her settling in session so much that we were the last ones to leave and had got ourselves locked in!

Tomorrow morning as she puts on her uniform and her beloved new school shoes, I will try and remember all of these fearless moments. I won’t dwell on the sadness of what we’re leaving behind, I’ll think of the new adventures she is about to have and the learning journey that we will share together. I’ll take a leaf out of her book and put on my very own ‘fearless’ face. I’ll tell her of the fun she will have, the friends she will make and I’ll remind her of what a brave little girl she can be. I’ll give her one last cuddle and squeeze, whisper how proud I am of her and then tell her to skip on into class, just like she did on her settling-in day. Because #thisgirlcan. 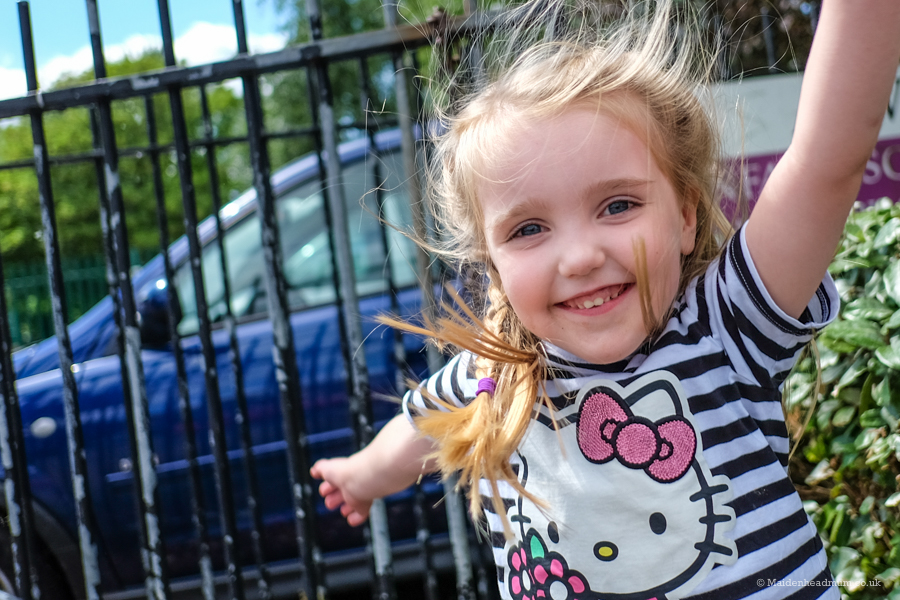 Jumping for joy after her first settling in session at school.

Good luck my Little Lady, see you after school!

I write this ‘Maidenhead Mum’ blog to share my experiences of life here in Berkshire and beyond. For up to date posts about life here in Maidenhead, you might like to follow my Maidenhead Mum page on Facebook. Or, if you subscribe using the box below you’ll get my blog posts delivered straight to your inbox along with some behind the scenes photography tips on each email.

You may manage your subscription options from your profile