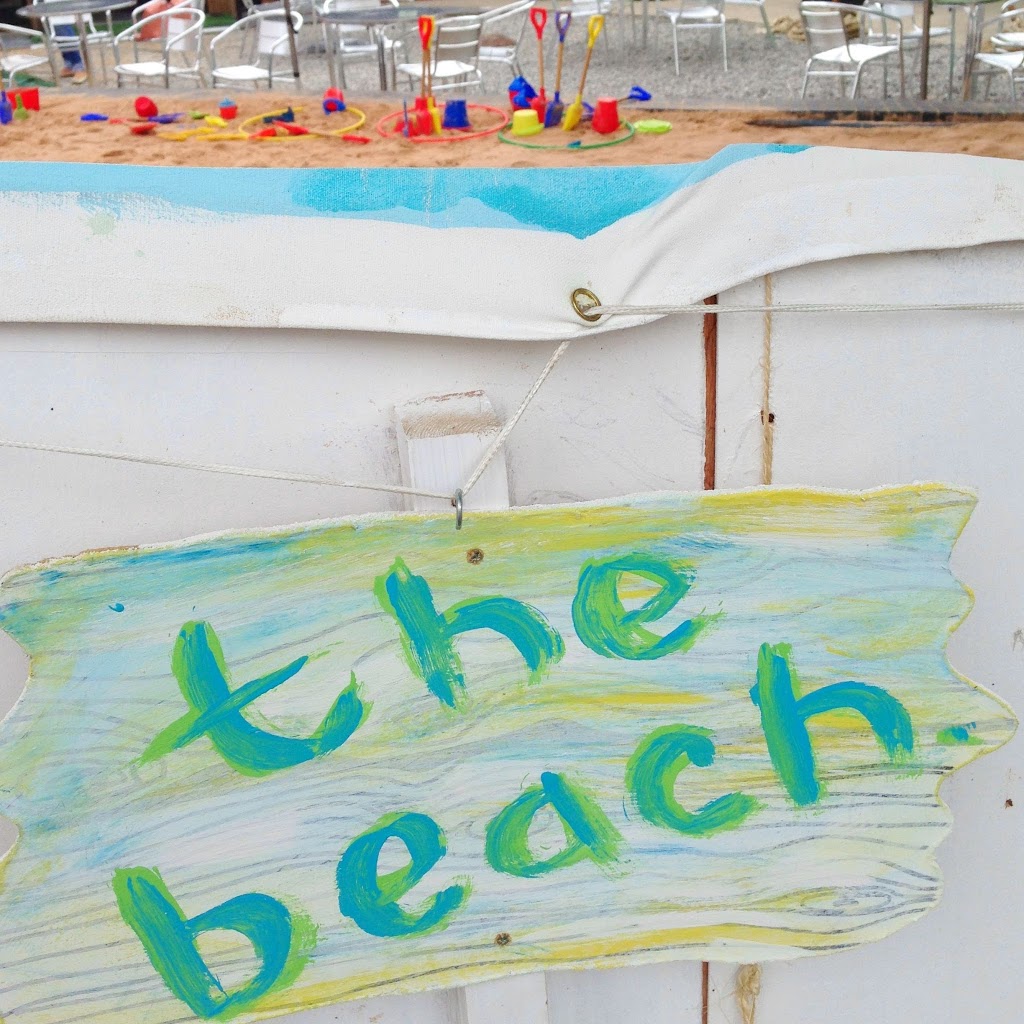 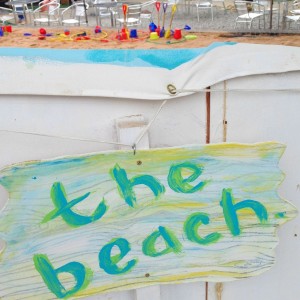 Considering my traditional grumble about Maidenhead is that ‘there’s nothing going on here’, we’ve been lucky this year in that we’ve had not one, but TWO beaches come to town. One for the Maidenhead Festival and one at Norden Farm. Admittedly the beaches are slightly more geared towards the kids than us parents (sadly there hasn’t been a cocktail bar at either) but remember that a happy child = a happy parent.

After my slight misadventure and the tale of the missing shoe last time I went to ‘the beach’ with the little one (which you can read about here) I decided that this time, all three of us would go and I convinced my other half that we should go on a Saturday morning. In fact I was pretty much ushering him out of the door before he’d even had chance to have a second coffee, thus breaking a golden rule in our house. Nothing useful usually gets down before The Second Coffee. I was so keen to get us out the house that I made him use his travel mug and have a coffee on the go whilst pushing the little one. It was all very ‘dishy daddy/yummy mummy’ straight out of Wandsworth and Clapham Common. I’m very lucky because Norden Farm is surprisingly close to where I live. As in, its just round the corner. The first time I realized this I squeaked! To be honest, there were two squeaks: One at the discovery that Maidenhead had an Arts Centre then another when I saw it was just off the Bath Road. If you’ve read some of my other posts you’ll know that I have lived in New York and London, and its not that I’m a culture vulture obsessive type, but I just had no idea that Maidenhead even had anywhere like this. Over the last year I’ve been amazed at how many first time mums I’ve got chatting to that have de-camped from the big city and moved to Maidenhead. It would seem there are lots of ex Londoners living here that need to know that this is on their doorstep! (note to Norden Farm people, you need to shout about yourselves more often!)
Anyway, my other half was keen to see what it was all about too, although he was a little bit skeptical when we arrived and were the only ones on the beach (‘Are you sure we can just walk in here’? ‘Yessssss!’) We got the little one out of the pushchair and let her ‘walk’ (She’s not quite there yet)  across the sand. I headed for the bar. Only for a cup of tea, I promise. And my other half found his inner Alpha Dad and immediately set about building sandcastles. They just cant help themselves. There’s Dad Pride at stake, even if just for mine and the little one’s benefit. 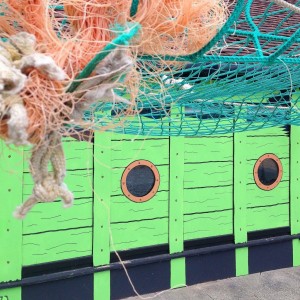 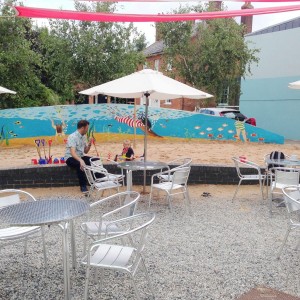 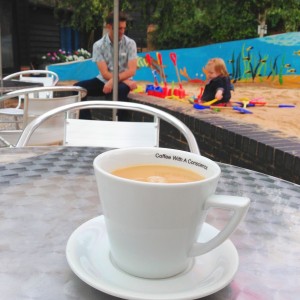 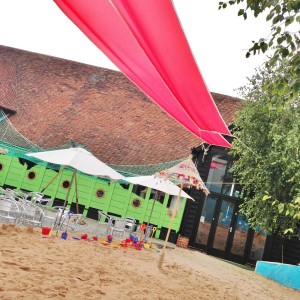 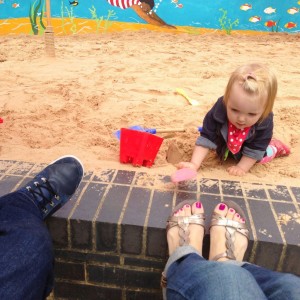 For the next hour or so I was able to sit and drink a cup of tea while the two of them played in the sand. I like to call that a Result. Everyone was happy. And I had a go at making a few sand castles myself, although obviously none as good as my other half’s. Never compete with Dad Pride! 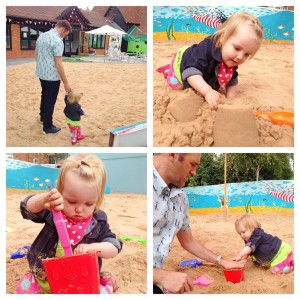 Its fair to say you could accuse me of being a little tardy with this post, what with it now being September and the beach at Norden Farm soon to be packed away safely (hopefully ready to return next year). But actually, I don’t feel too guilty, because, aside from the fact that the beach was great, there is a bigger thing to talk about here.
Norden Farm itself. The Arts Centre. In Maidenhead. I sometimes feel like I’m a one woman mission to tell people this. Admitedly its not in the city centre and is tucked away on Altwood Road (near to the Sainsburys Local). But its a genuinely good thing that Maidenhead has to boast about. They have live performances of theatre, comedy, music and even family friendly showings of films too.
Walking into the cafe bar you can immediately feel the air of culture. It has the air of London Southbank on a Sunday morning. That feeling of ‘ahhh, I could have a great coffee here and read the papers’. Easy like a London Sunday morning. Where else in Maidenhead can make that claim?!
Admittedly those kind of mornings don’t really exist anymore now that I have a 15 month in tow. 7.10am is a lie in and a ‘result’!
And in fact last week my other half was most put out that I dared to wake him at 8am on a Sunday morning with a cup of coffee in bed and a slightly hyper child. Apparently that wasn’t a ‘treat’. I’d been up for ages and in hindsight my perspective on reality had been shifted by two cups of tea so I thought he’d really like to be woken up. Turns out that was a no! Its another one to add to my inner parenting handbook. We live and learn!

So this weekend when you’re making your way up to Boyne Hill Playground and you fancy something a little bit different, why not nip round the corner and have a cup of tea on the beach. I promise you you’ll be glad that you did. Although I cant promise that you won’t spend the rest of the day finding sand in unusual places. (How does it get in their nappy?!!) 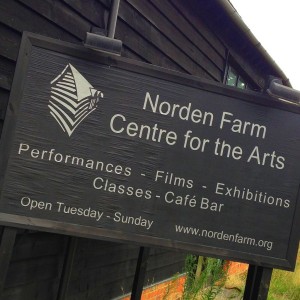 If you’d like to find out more about Norden farm its worth checking out their website (www.nordenfarm.org) and you can see see their programme of events here.

If you’ve enjoyed reading this post and want to stay updated you can choose to follow me on Twitter,you can visit my website www.maidenheadmum.co.uk or you can use the boxes on the right hand side (on desktop) or at the bottom of the screen (mobile) to get my posts sent to you by email.