Crossrail, what would Brunel think? 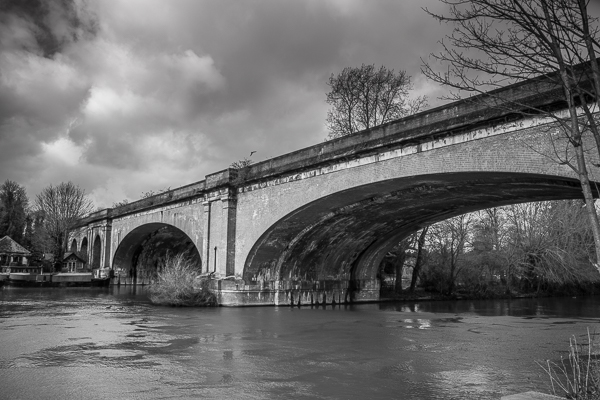 For us Maidenhead folk, Crossrail is starting to crop up in more and more of our conversations. Whether it’s the (organised?) chaos of Maidenhead station car park as the platforms are developed or the spurt in house prices we’ve seen over the last 12 months, I think its fair to say that there is a certain air of anticipation and curiosity in the air.

If you’re not familiar with Crossrail you can find out a bit more about it here, but essentially its going to link the West of London with the East by creating a brand new railway line that cuts right underneath the centre of London. For people living in Maidenhead it means that rather than having to catch the train to Paddington and then get on two tube lines to reach Tottenham Court Road, we’ll be able to catch one direct train that will take us there in 40 minutes direct. It’s potentially the biggest single rail project that the UK has ever seen, and since Brunel’s work on the railways in the 19th century, it’s probably the most ambitious. But apart from the platform re-construction that we can see taking place at Maidenhead station, much of the ‘magic’ is happening underground away from our eyes, but some recent documentaries on the BBC have helped give us a glimpse of the behind the scenes action.

I should perhaps add a disclaimer before we go any further: I admit that I’m a bit of a geek when it comes to design, architecture, engineering… and London so I’ve been trying to follow as much about the Crossrail build in the news as I can. I should perhaps also confess that in the days before having a toddler, my other half and I could often be found in the cultural hotspots of the London Transport Museum, The Canal Museum… and not forgetting a personal favourite, The Brunel Museum! (Thank goodness we both share these interests!) 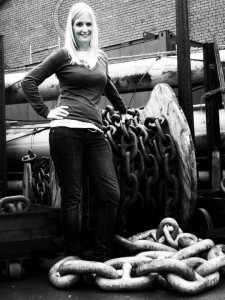 My attempt at the infamous Brunel photo standing in front of chains.

Thankfully our shared love of architecture and London transport history led a unique city-based wedding in London last year with our reception being held in a pub above Kings Cross station.

Our wedding was based around St. Pancras and Kings Cross Station in London

Putting my Brunel and transport obsession aside, there are lots of links with Brunel in Maidenhead, in particular his famous Maidenhead Railway bridge, which, when built was the largest single span arch in the world. He built the Great Western Railway linking London to the West Country when he was just 29 and has left us an unrivalled legacy of ingenuity when it comes to engineering and architecture.

Here’s some images of how the bridge looks today, including a slight grumpy toddler and her (not so grumpy) Mum! 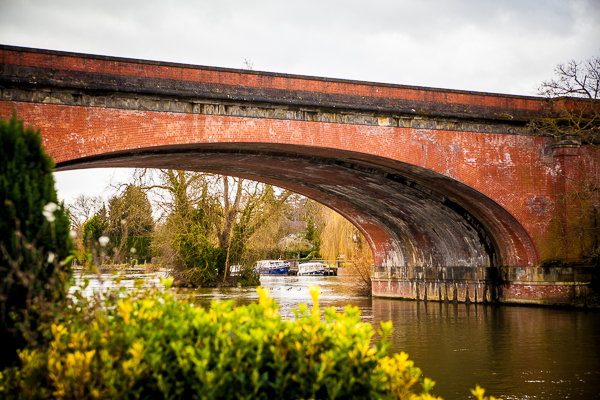 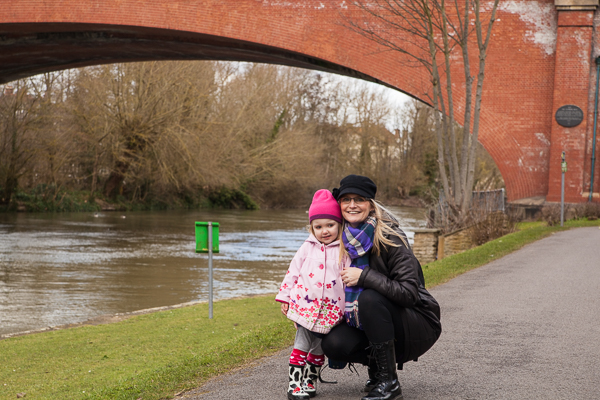 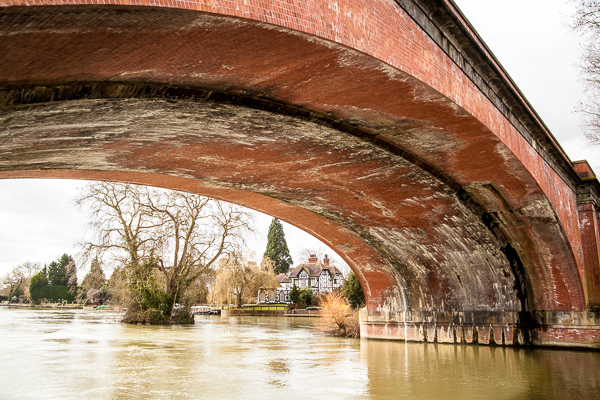 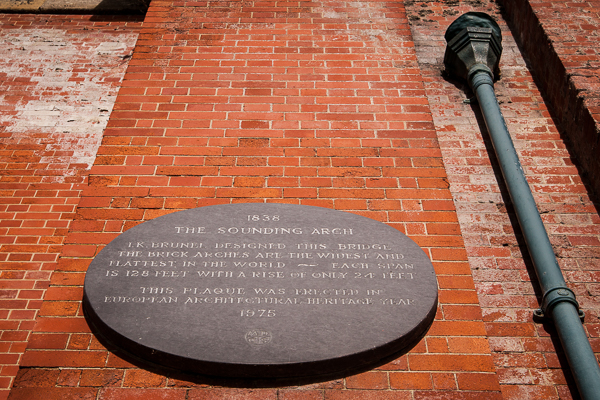 If I could invite Brunel round for dinner (we all have our little fantasies! Stop laughing!) I’d probably show a recent programme on BBC iPlayer that was a ‘must-see’ for my husband and I… ‘The Fifteen Billion Pound Railway’. 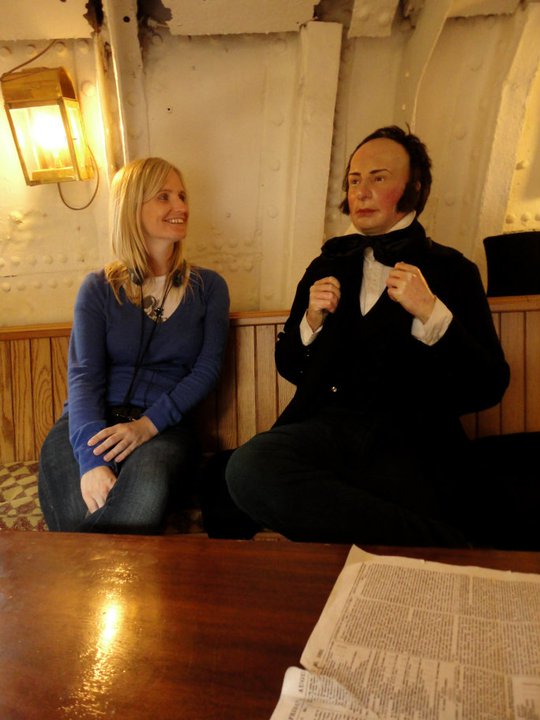 Ahh, the thrill of having Brunel as a dinner party guest!

A glimpse behind the scenes of Crossrail

This first of three programmes looked at the intricate and quite frankly, amazing engineering challenge that the Crossrail engineers faced as they tunnelled their way under Central London. The engineering team have had a camera crew follow them for the last two years as they carve their way beneath the streets of London. With 42 km of tunnels to dig underneath listed buildings, in between several levels of tube tunnels and whilst business above ground continues without disruption, it’s almost intimidating to see the enormity of the project. Building a railway underneath such a developed and bustling city is a very different project compared to building the original Great Western Railway in the 1830s, and perhaps we’re sometimes guilty of not thinking about the complexities involved. But, although the scale and the complexity of the project are very different, I think Brunel would be pretty chuffed to see that the modern day tunnelling machines used bear a striking resemblance to his personal invention: ‘The Tunnelling Shield’.

As we watched the documentary, there were a few shout-out-at-the-telly ‘No Way!’ kind of moments for us which I’m going to mention here, (with some screen shots courtesy of the BBC) not as a plot spoiler, but because I have a hunch that if I don’t mention them you might just dismiss me as being a geek and that this isn’t really that interesting… But trust me, it will certainly make those journeys to Central London a lot more interesting when you can imagine and visualise whats going on underneath the train that you’re sat on!

The Eye of the Needle, Tottenham Court Road

In order to link up both sides of the city, the Crossrail team needed to construct a tunnel underneath Tottenham Court Road station. This area of London is congested above ground… but below ground even more so. Both the Northern Line and the Central Line intersect here and there are lots of other pipes and infrastructure that they need to avoid as they dig.

The only route that the tunnelling team could take through all of this was to squeeeeeze into a gap between the escalators of the Northern Line at the station, a gap with just 35cm clearance above it and 85cm below.

Without wanting to reveal too much, their plan was to keep Tottenham Court Road station open to millions of underground passengers while they did it!

This part of the programme offered a revealing insight into the forward planning that has to go into a project like this, before any actual digging or tunneling can start. The engineers behind Crossrail have had to do a huge survey assessing all of the listed buildings that will sit above the proposed tunnelling route and install monitoring equipment to track if there is any movement above ground as they tunnel underneath.

But it’s a little bit more mind-blowing than that, they have installed an underground protection system of 20 shafts around London. Each of the shafts has hundreds of tubes running out from it, and, should there be any movement in the ground above where the tunnelling machines are working, they can inject grout into the tubes to fill up any spaces or voids that have been created by the tunneling. There are some fantastic graphics that help bring this to life in the following clip. 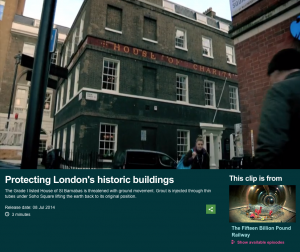 to watch the clip

Want to find out more?

Hopefully I’ve helped whet your appetite to find out more. You can get regular updates, including photos and videos on the Crossrail Facebook page and there is currently an exhibition (running from the 1st February 2015) at the London Transport Museum, which you can find out about here. (I plan to visit soon so will report my findings.)

And, if you’re reading this before the 30th March 2015 you can still catch the first of the BBC documentaries on iPlayer. Click here to watch now.

So that just leaves us with one question:

What would Brunel think?

Knowing his passion for pushing engineering knowledge to the limit (no one believed that his arches on the Railway Bridge would stay standing!) I think he’d be pretty proud of where we’ve come to since his first railway building and tunnelling adventures.