Should you buy a mirrorless camera? The Fuji XT2 reviewed 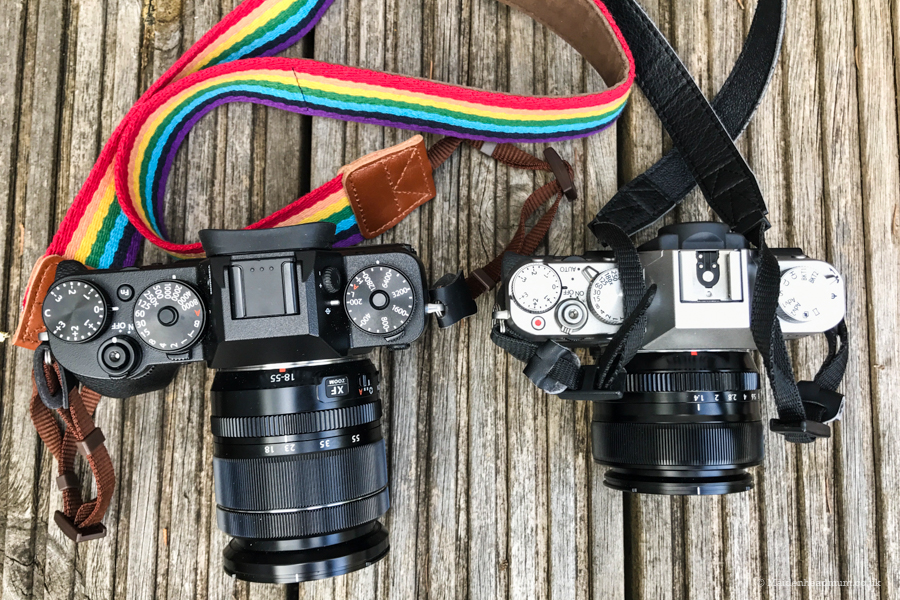 Lots of people ask me about which camera they should buy and people are often curious about which camera I use for the photography on the blog so I thought it was time to share a few secrets. My husband always teases me that I can babble endlessly about cameras and photography so I should warn you all that this post has LOTS of information about why I like using mirrorless cameras as well as giving a review of the Fuji XT2. I’m always happy to answer questions about camera choices so leave a comment on the post if you get a bit lost along the way.

Tools of the trade: which camera do I use?

I’ve been a Fuji mirrorless camera fanatic for nearly two years now. Although I have a full frame Canon DSLR in my kit, it’s the Fuji XT10 that comes out on day trips, holidays, events, parties… pretty much everywhere. Alongside the Fuji XT10, I use the iPhone 7 but I find I use this less and less for photos these days as the Fuji is pretty much always with me on my travels and adventures. I’ve even used it for lots of the photos in my Maidenhead Calendar.

My Fuji XT10 is a consumer level camera with an APS-C sized sensor (the same as you would find in crop factor DSLRs like the Canon 650d). It’s an interchangeable lens camera, and I own two prime lenses (these have a single, fixed shooting distance) and one zoom lens. Currently, I prefer to shoot with the zoom lens attached as it gives me the most flexibility when I’m chasing the kids around on our adventures and day trips. I bought the XT10 for around £500 with a kit lens in 2016. At the time I was deciding between the Xt10 and the Xt1 as they both have the same sensor inside. At the time, I decided that I didn’t need the weather-sealed body on the XT1 and opted for the smaller, lighter XT10 and saved myself around £700 in the process. It’s been pretty much my go-to camera ever since. Some people believe in love at first sight, I believe in ‘camera chemistry’, and with the XT10 I was smitten.

Roll on 2017, and there are now newer versions of both the XT10 AND the XT1 (XT20 and XT2) so when the opportunity came to review a Fuji XT2 from Calumet, I jumped at the chance. I was keen to see what the brand new, fully pro version of the camera could do.

Why am I such a Fuji fanatic? 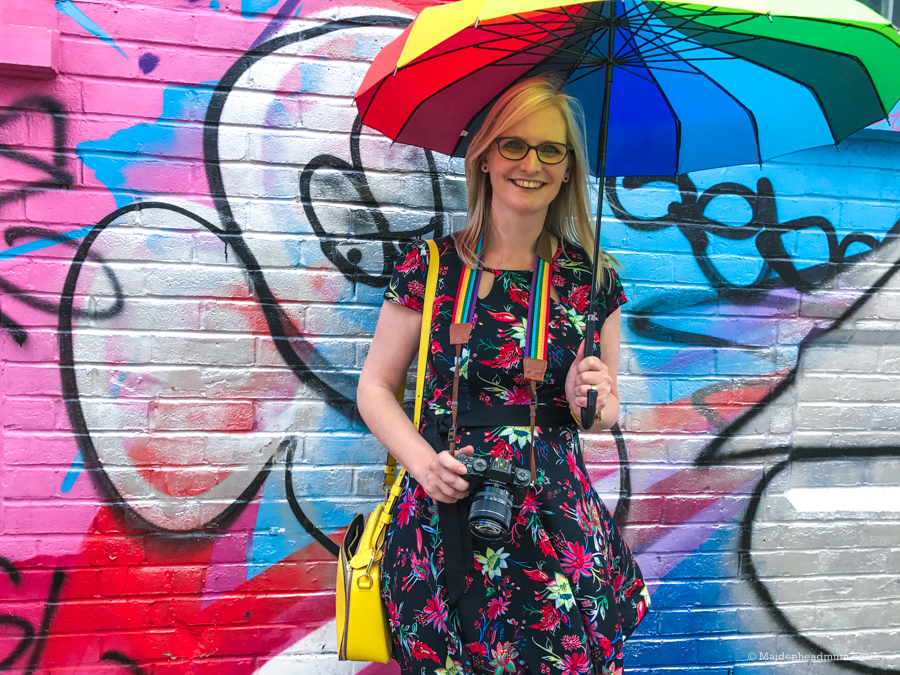 The Fuji Mirrorless cameras offer the functions of a pro DSLR, but in a smaller form. So I can fit them in my favourite Orla Kiely handbag!

Before I talk about my photographic adventures with the XT2, I thought it would help if I explained some of the reasons that I’ve become so smitten with Fuji:

Size and weight.
I was pleasantly surprised by the size of the XT2. Although it is bigger than my XT10, it didn’t really feel that much bigger in my hand. I was excited to see that it fitted in the same neoprene wrap-around case that I use on the XT10, which meant it could still be carried around in my usual bag: no need for a separate camera bag. (Although seeing as this was on loan from Calumet, I did give it VIP treatment in it’s own camera bag for the weekend!)
I tried the XT2 with the 35mm f1.4 lens on loan and the 18-55mm f2.8-f4 which I already own. Even with the slightly heavier zoom lens attached to the XT2, I still felt that I could happily wear it around my neck all day while I’m out with the kids and pushing a buggy around. 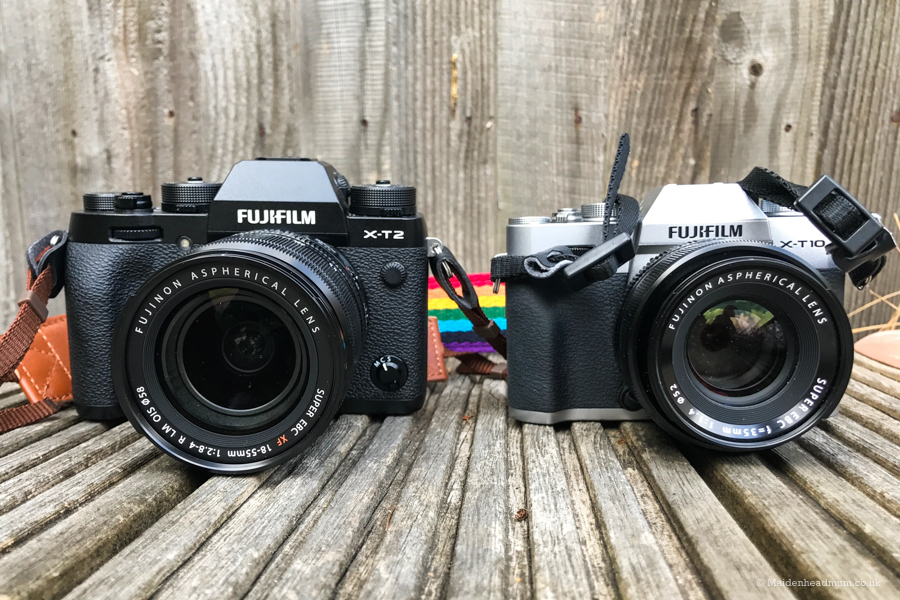 The XT2 alongside my XT10. A bit bigger, but not outrageously so. 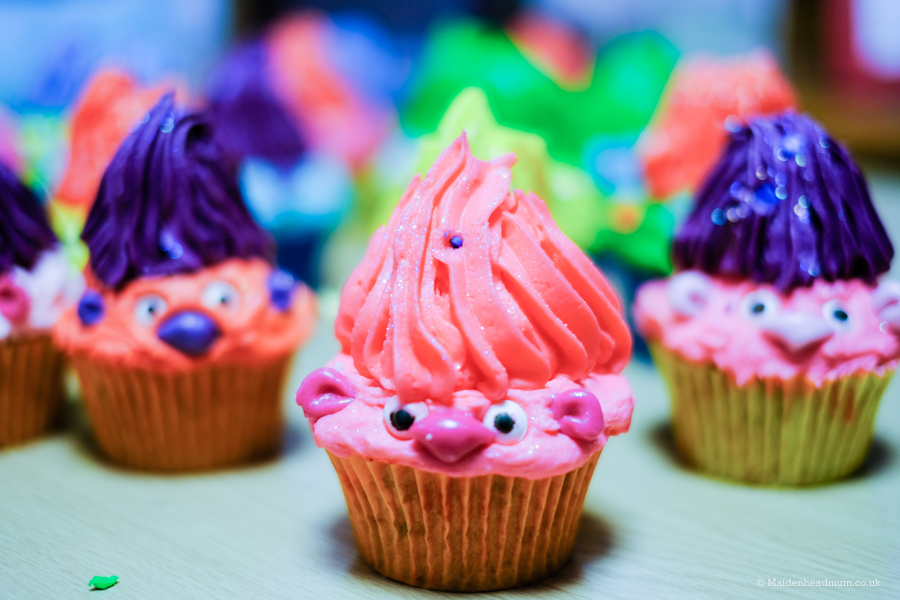 The 35mm lens on the XT2 has a really shallow depth of field which is great for blurring out backgrounds.

The 35mm lens that I borrowed stops all the way down to f1.4, so it lets in lots of light and creates beautifully blurred backgrounds and bokeh effects. It’s also light and compact and has an aperture ring on the lens body itself which simplifies aperture changes while you’re shooting. (Some of the cheaper Fuji lenses don’t have this option, so double check before you purchase). Having a 35mm focal length on the XT2 is a similar field of vision to a 50mm lens on a full frame camera and it’s meant to be pretty similar to what you see with your own eyes. When I first bought my XT10 I used Fuji prime lenses and raved about them, but recently I’ve been using the 18-55mm zoom (f2.8-4) as it’s just so practical when you have two small children that don’t stay still.

I found I struggled to get to grips with using the 35mm prime at my daughter’s birthday party as there was so much action going on, but when I was able to use it in a less action-packed, more creative environment, I loved what it was able to capture. 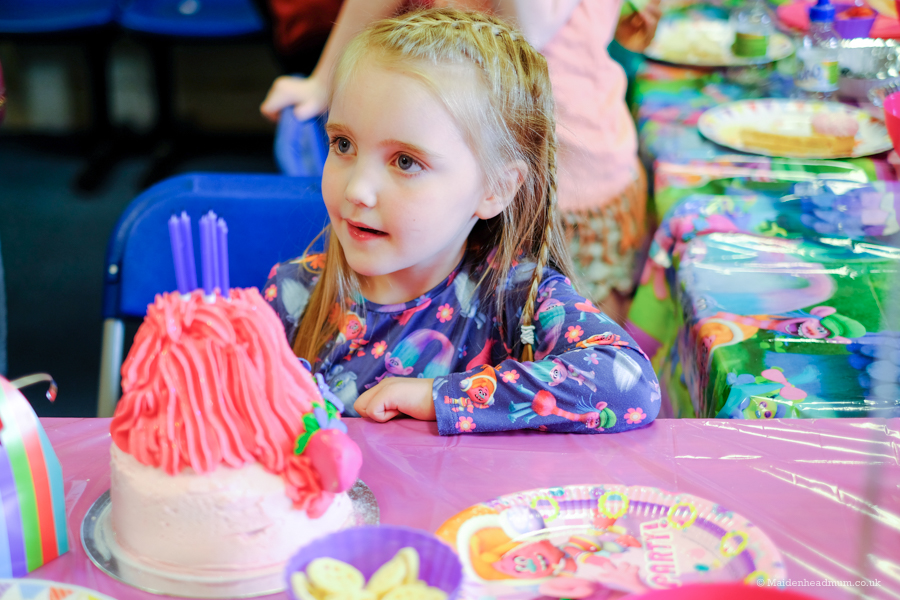 My daughter’s party was in a room without much natural light but I was able to capture some images of her with the XT2. 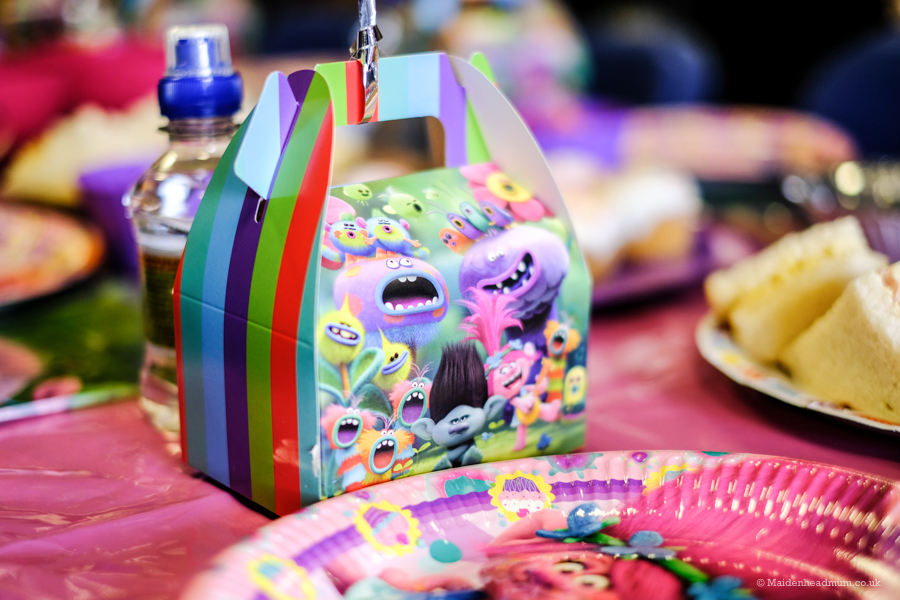 There was a bit of a theme to her party, can you tell? 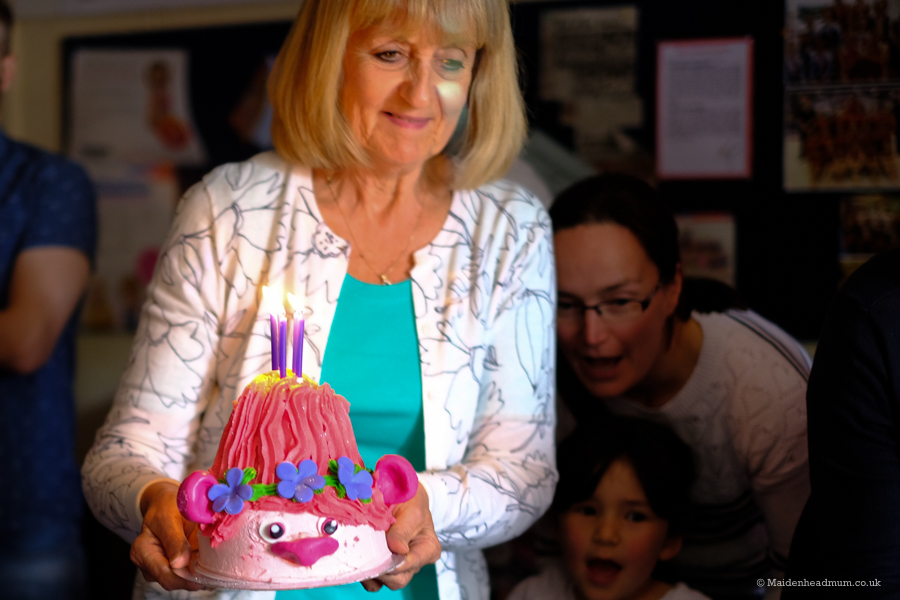 The photos
I feel a bit of a cheat talking about photographic quality as the third part of this post, but I think that’s because as a Fuji user I now take it for granted that a tiny mirrorless camera can compete with the image quality of a DSLR. You’ll be pleased to hear that the XT2 doesn’t disappoint here. The JPEGS are beautiful, sharp and vibrant straight out of camera and need little editing.

Here are some photos which were taken indoors: (at the pub after the party!) 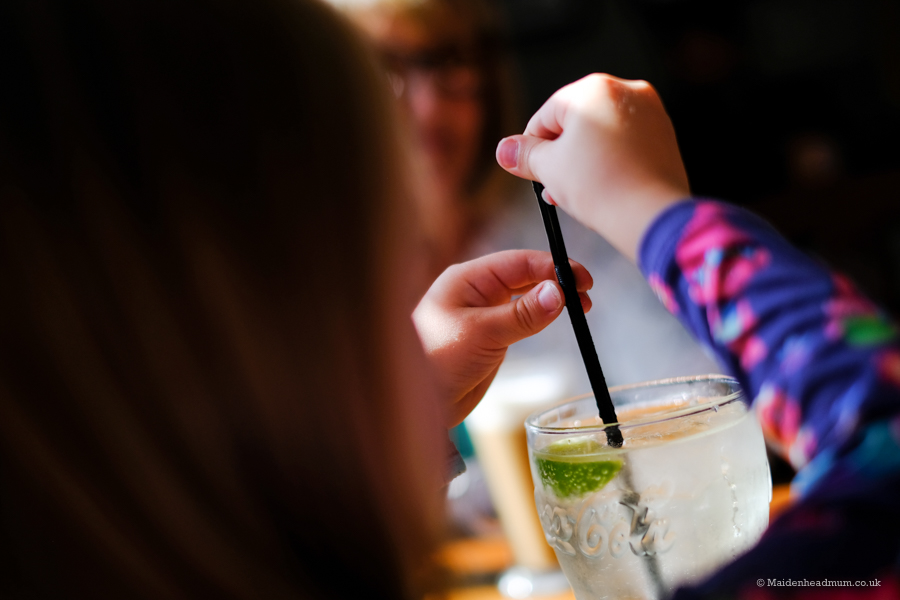 Playing around with the f1.4 depth of field. You could get very arty with this lens. 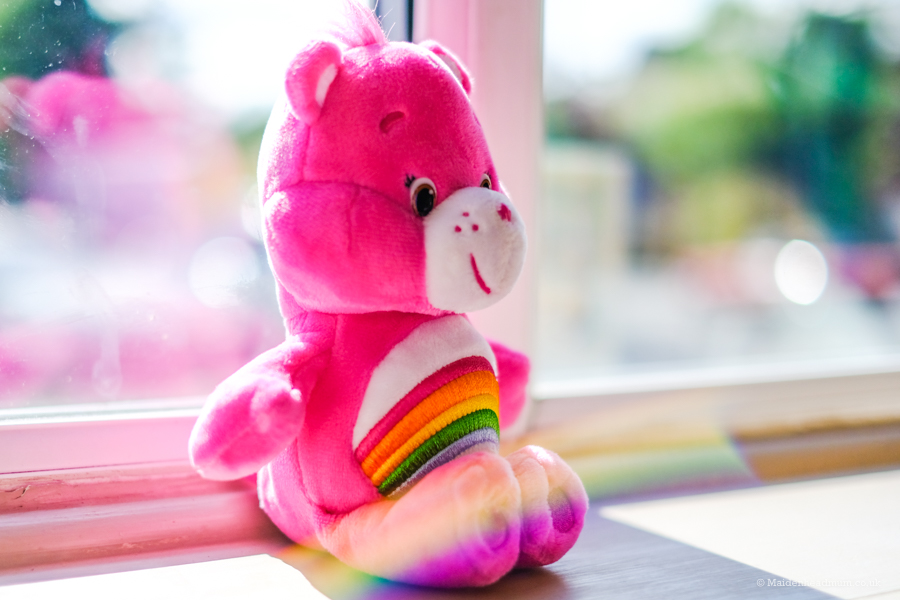 There was so much light streaming through the window but the Xt2 did a good job of balancing the exposure on the Care Bear and it even added a lens flare rainbow! 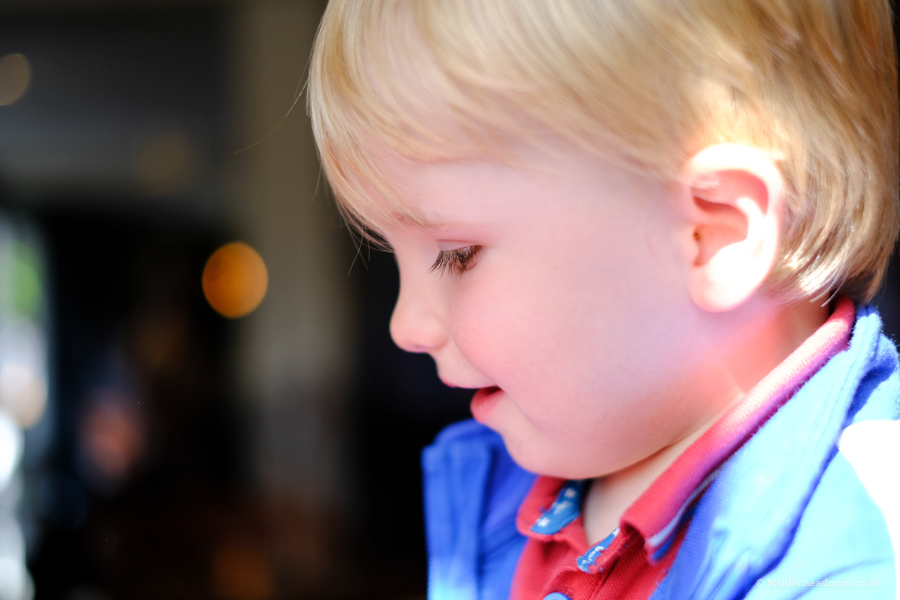 I like the crisp focus on my son’s eyelashes and the blurred background.

The following day I went out to check out a new memorial garden at a local park and put the XT2 through it’s paces in daylight too: 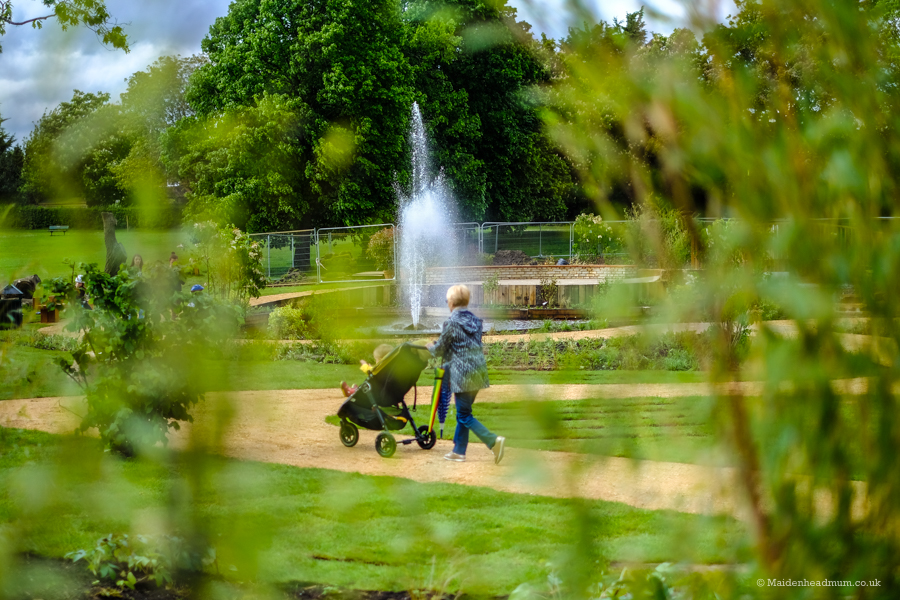 ‘This way Nanny’! Outside I chose to use one of the Fuji film simulations (‘velvia”) for bright images. 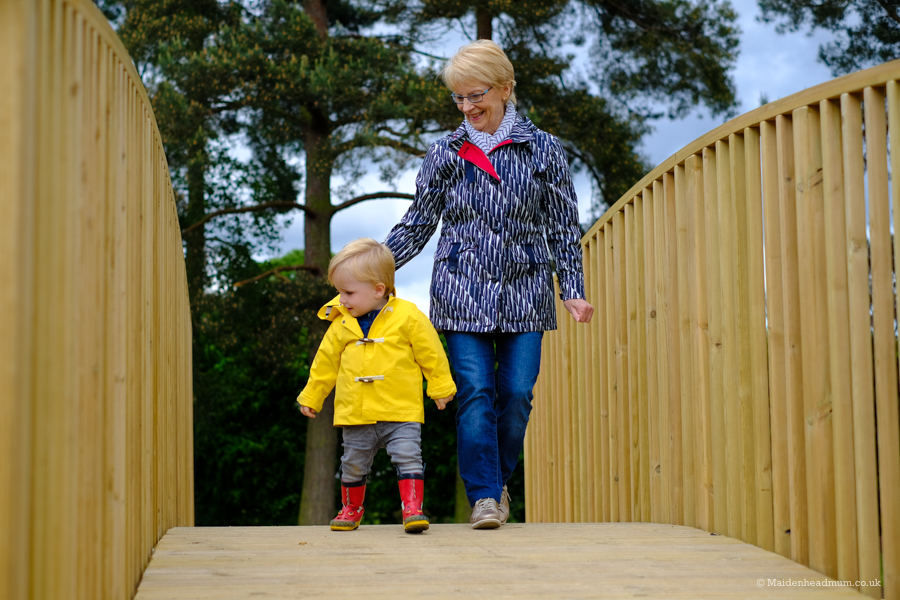 The Fuji XT2 was quick to autofocus, meaning I could keep up with my speedy toddler. 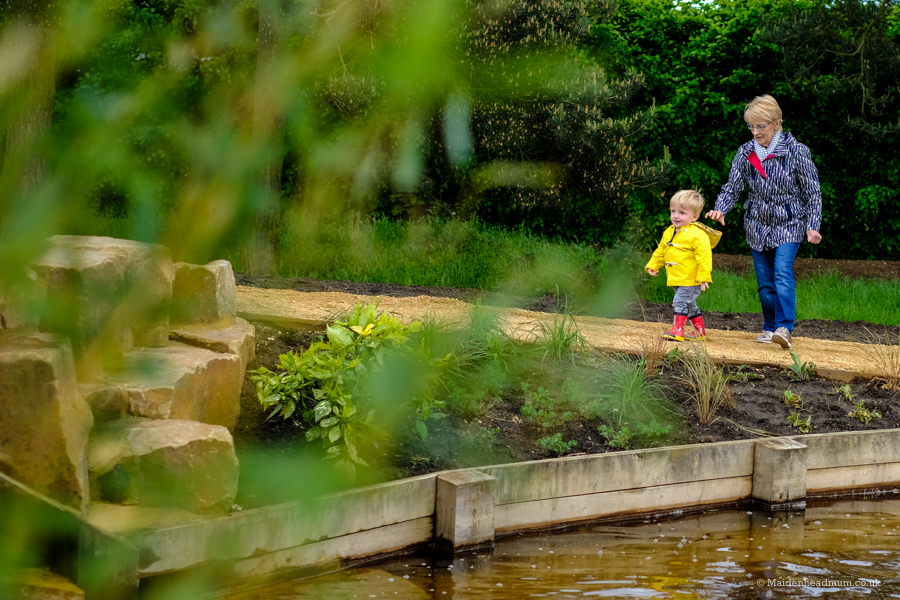 I hid in the trees (as you do!) to play around with differential focusing. 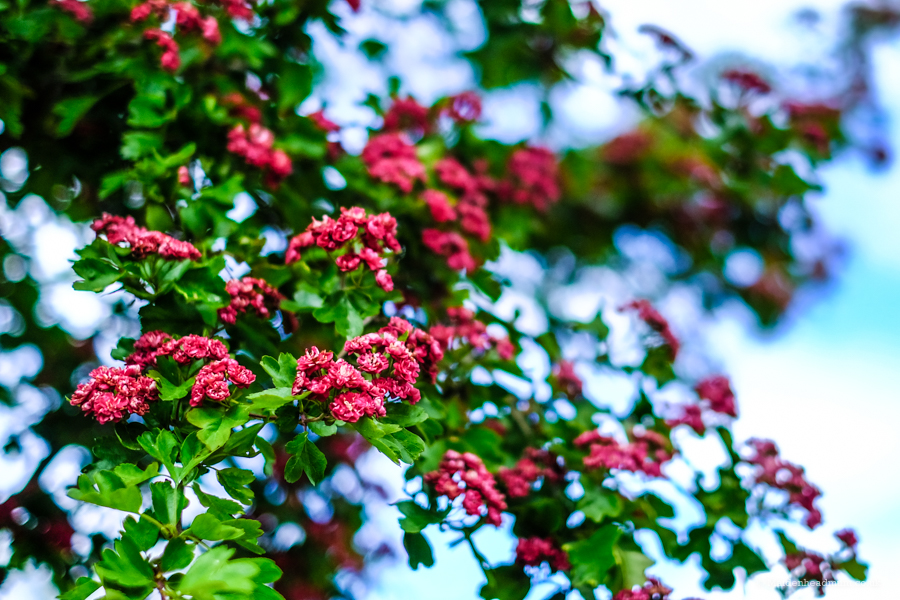 The 35mm lens gives you great potential for blurring out backgrounds

In fact, it wasn’t until day two of the loan of the XT2 that I remembered to switch RAW shooting back on so that I could try that too. 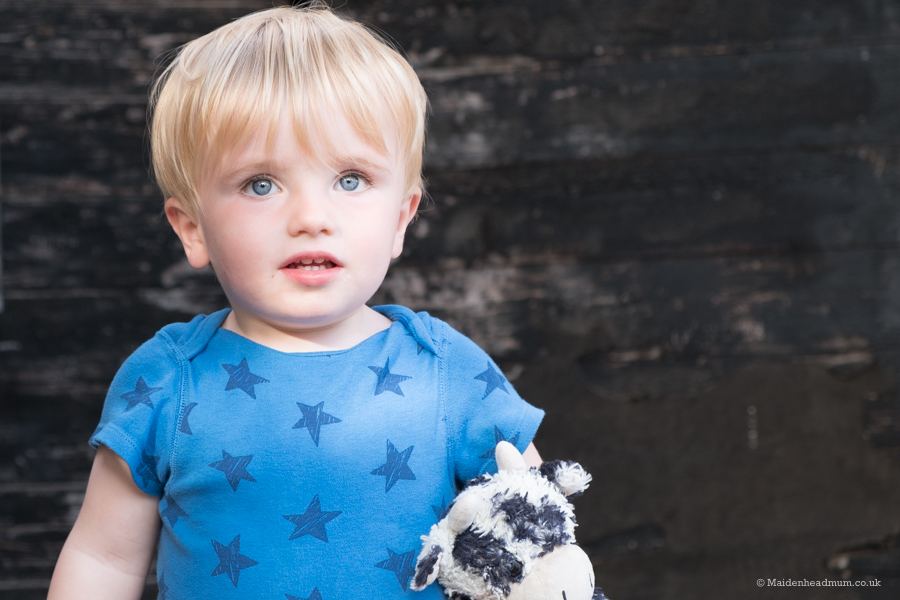 This is a RAW, straight out of camera without any editing. 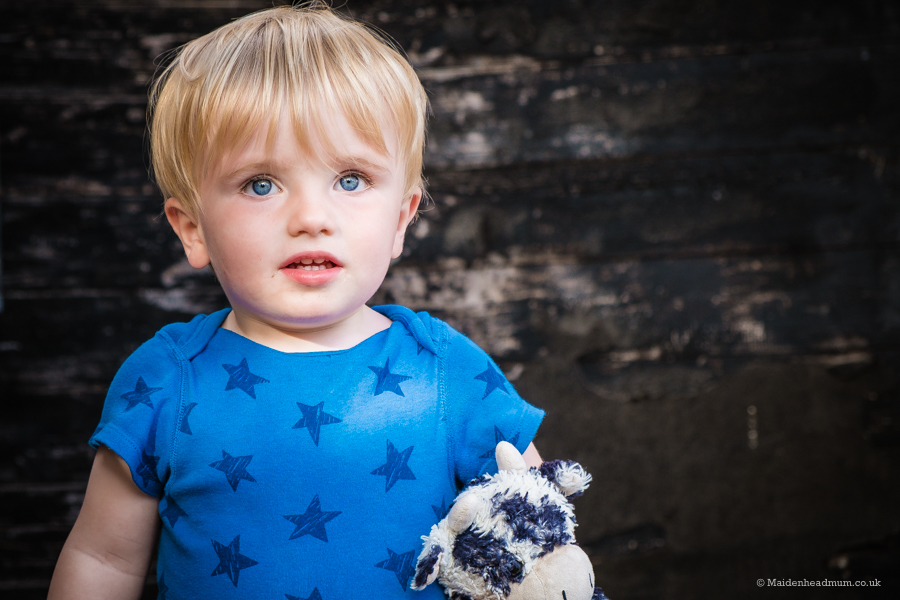 This is the edited version, I just tweaked the shadows a little. Super quick edit! 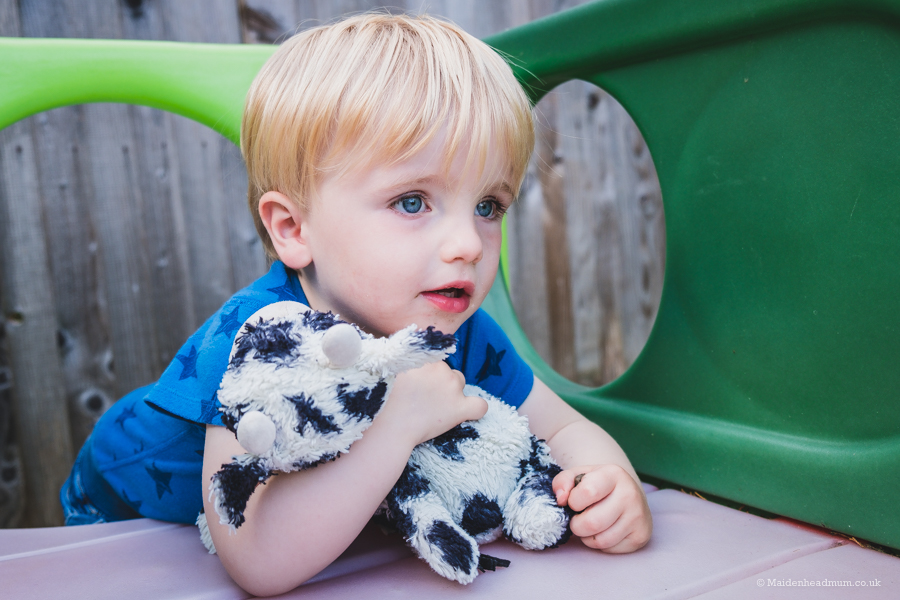 Although my son is FAST, I found it easy to get lots of images in focus. 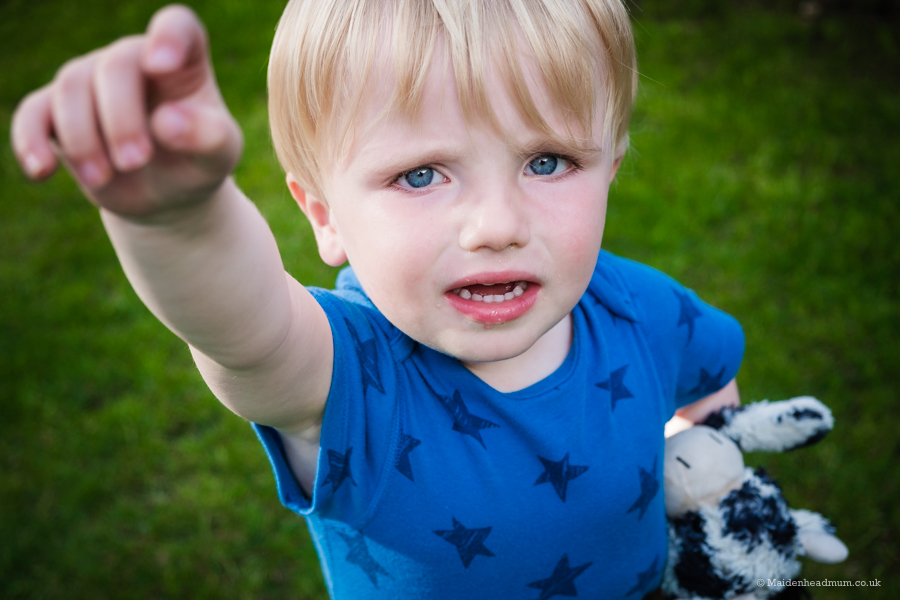 He wants the Fuji XT2!

Will I be buying one?

When it comes to buying a new camera, it takes me months of research and decision making. I’m not really one to be plagued by ‘Gear Acquisition Syndrome’. I’m not bothered about having the latest shiny thing; I’m more concerned about it being EXACTLY the right camera for me. So I have found myself a little bit stuck.

As much as I felt very safe with the XT2 in my hands, I did also miss the smaller sized XT10 too. Although I’m a professional photographer, I missed the ‘auto’ flick switch on the XT10. This is great when you’re passing the camera over to someone else to take your photo, or when you’re running from one different lighting situation to another and haven’t had the chance to assess and adjust your exposure. If that’s not really an issue for you, then I wouldn’t hesitate to recommend the Fuji XT2 to other professionals looking to switch to a more lightweight system without compromising shooting quality, or for bloggers and enthusiasts looking to invest time and money to help them develop their skills. The smaller versions (XT10 and XT20) would also be worth checking out as they offer similar shooting options but with a smaller price tag. (At the time of writing this post, a Fuji XT2 with the 18-55mm lens is £1649 and the XT20 with the same lens is £899). If you’re still struggling to decide which camera would be right for you, at the Calumet store in London there are lots of experts on hand that can talk you through the Fuji camera range first hand, or you can attend one of their ‘experience days’.

Ideally, I would like to spend a bit more time with the XT2 and use it with a flash to really see what can be achieved. I’ve read about so many wedding photographers that have switched to the XT2 that I’m confident it’s up for the job, but I’m still deciding whether I would prefer the smaller XT20 instead. Decisions, decisions… how great that Fuji spoil me with so many options! 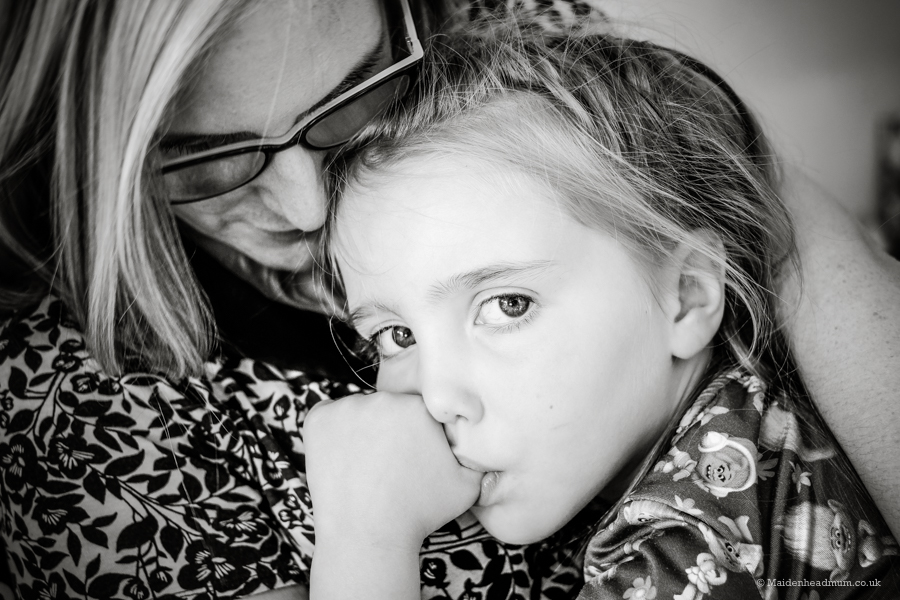 Cuddles with Mummy after a long day of partying.

I borrowed a Fuji XT2 from Calumet for me to test drive in return for an honest review here on the blog. I’m a huge fan of Calumet and have often chosen to purchase my professional photography equipment from them as they offer competitive prices and excellent service. 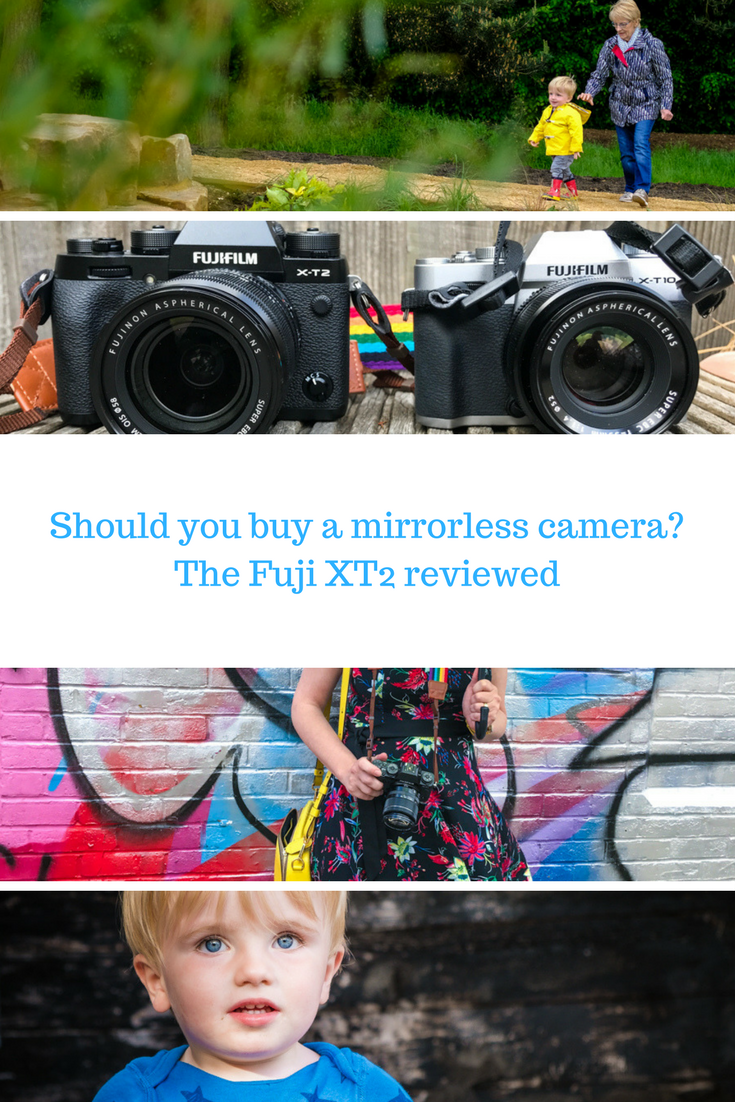 I write this ‘Maidenhead Mum’ blog to share my experiences of life here in Berkshire and beyond. I fit blogging into my ‘spare time’ around a four day a week day job and family life but I love to share the beautiful things that I find to see and do.  For more posts like this, you might like to follow my Maidenhead Mum page on Facebook or on Instagram as they are the most frequently updated. If you subscribe using the box below you’ll get my blog posts delivered straight to your inbox along with some behind the scenes photography tips on each email