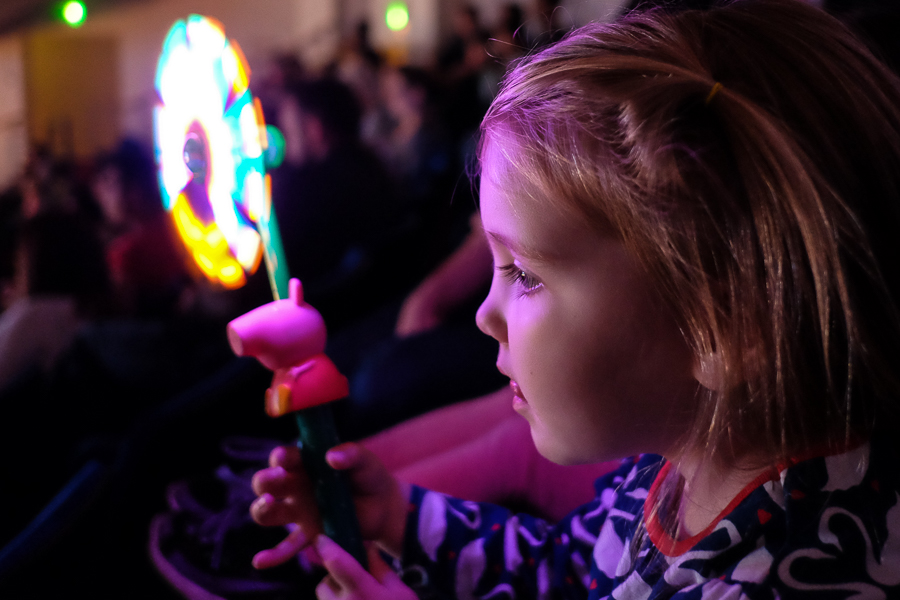 Two children, up, dressed and fed and two parents showered, dressed, breakfasted and ready to go by 9am on a Saturday morning. What was I thinking?! How on earth could this ever be filed under ‘fun family things to do at the weekend?!’
But I shouldn’t have had doubt. ‘Peppa Pig Live’ at the Wycombe Swan didn’t disappoint.

This was her first visit to a big theatre for a ‘proper’ show. We’d been to Norden farm twice before to see mini shows (and in fact her first reaction when I told her we were going to the theatre was to ask if ‘Mrs Macamoon’ would be there?!) Touching to know that things you do and see really do have a lasting impression on them. (You can read about our previous Theatre adventure here.)

Having been to the Wycombe Swan before for a comedy show, I knew that parking could get pretty hectic as the multi-storey car park next door rapidly fills up, and on Saturday morning it was no different. We found ourselves queuing for a space and thanking ourselves that we’d left with plenty of contingency time to spare.

Walking into the theatre was a pretty crazy experience. So many small children being herded around, many of them waving bright flashing lights… I challenge you to refuse to buy one! 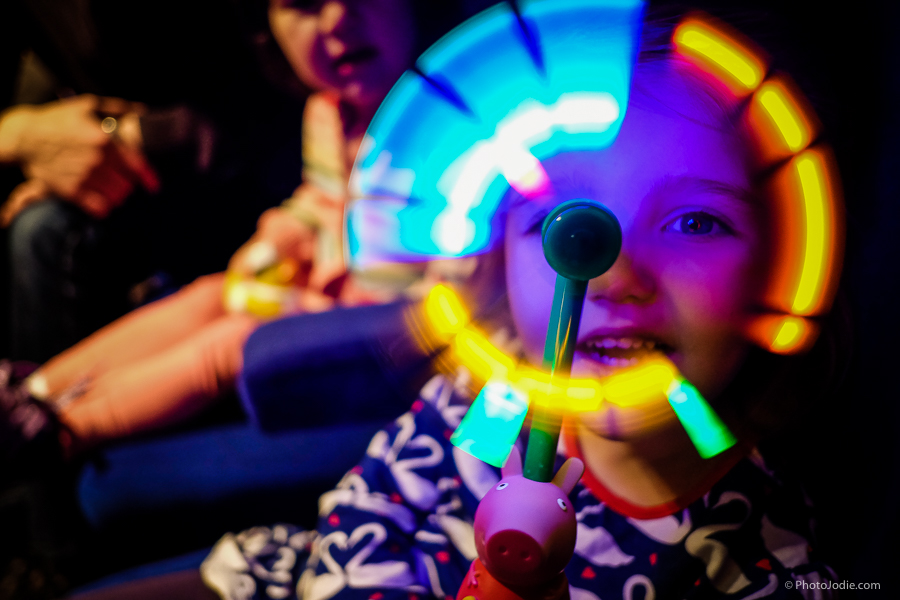 Nothing beats the thrill of a £7.50 flashy light thing. Apparently.

As we took our seats I wondered how she would react as we were quite far away from the ‘action’ compared to the shows that we’d seen at Norden Farm. I needn’t have worried. The minute the lights went down and the characters came on stage she was entranced. Genuinely a joy to watch to her react and interact. She was waving, shouting, (Peppa, I’m over heeeere’!) and clapping along. THRILLED doesn’t even come close. 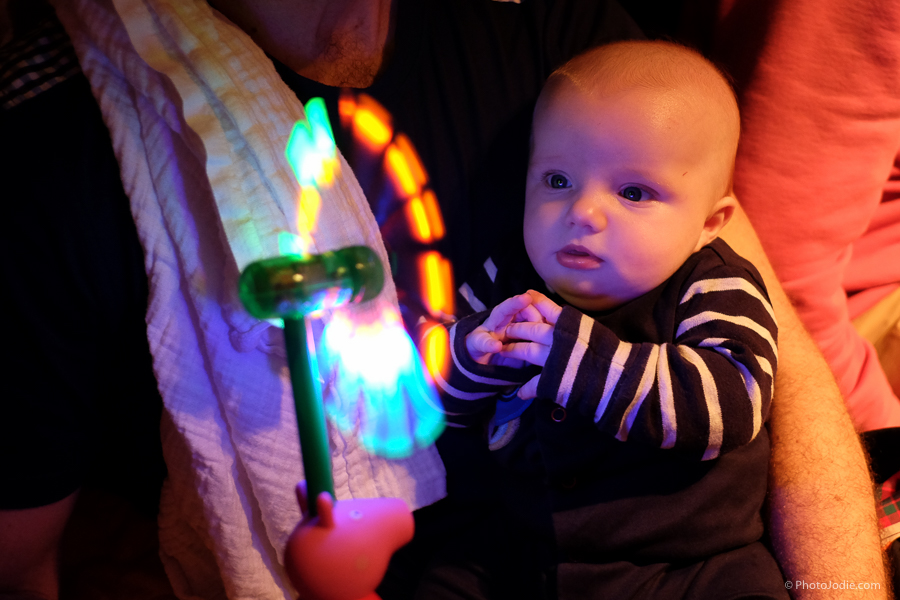 Flashy light thing can also be used as a ‘Baby Tamer’. Ace! 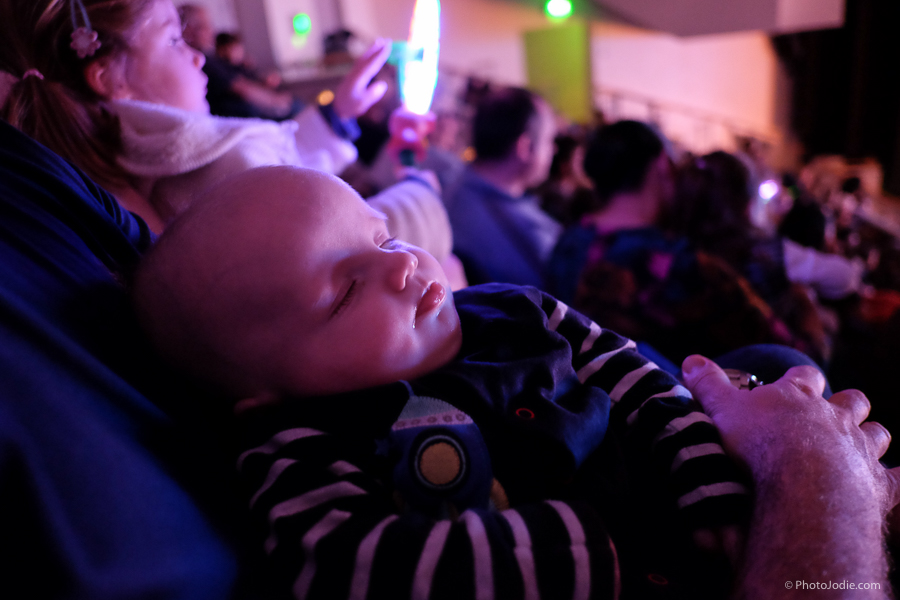 The Little Man slept through most of it… his time will come anther day! 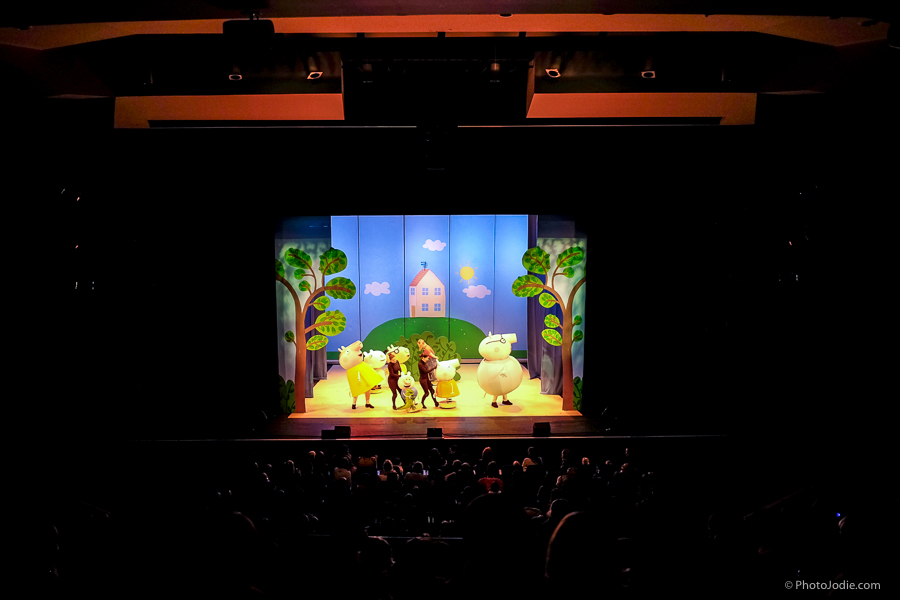 The characters and set are bright and fun.

The general gist of the show is that Peppa and her brother are having a surprise treat of a visit to the seaside and with the help of Daisy (a real life character). We follow the family’s antics as they get ready for their trip. The set design is bright and vivid and looks just like the TV show. The smaller characters (Peppa, George and friends) are all puppets on casters controlled by people dressed in black. When they first appeared I wasn’t sure how the Little Lady would react, but she didn’t comment or ask questions about them. To her it was Peppa. Real Peppa. Nuff said. The ‘grown up’ characters (Mummy and Daddy Pig) are actors in costume, but it all blends and flows rather well. 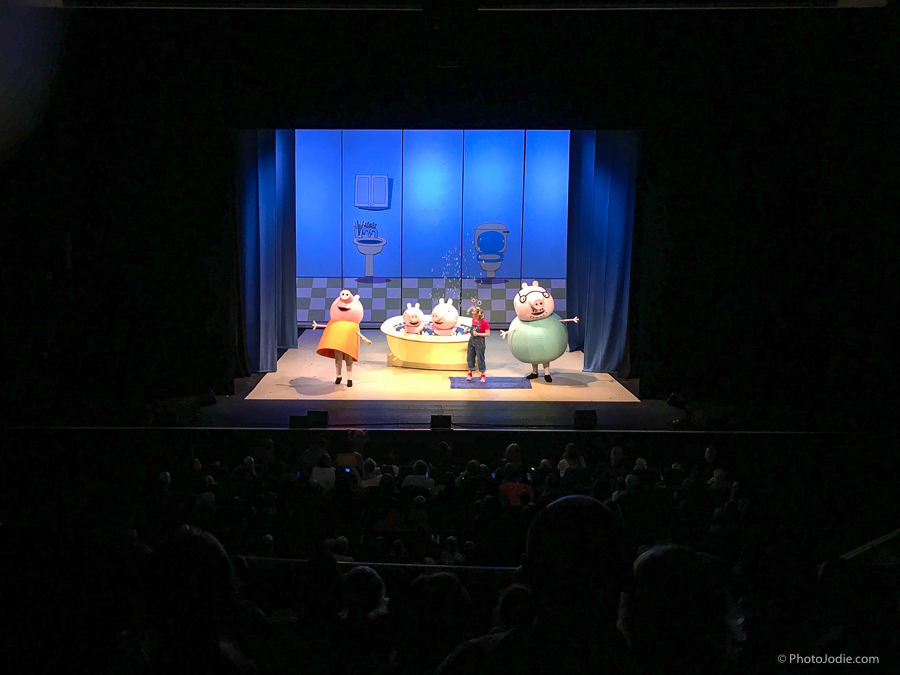 One of her favourite scenes: Peppa and George in the bath. Watch out for the real giant bubbles.

Running time is fairly long for a show aimed at 3-6 year olds (in my opinion). There are two halves, each lasting 35 minutes. I found that our Little Lady at 3 years 5 months was glued to her seat for the first half…enjoyed mucking around in the interval, but then was fidgety by the second half. Of course she decided that she needed the loo, even though I’d asked her in the interval, so we had to uproot all of our row to get past them in the dark. But on the plus side, you’re not the only one doing it, kids will be kids! Plus, the show encourages you to get on your feet and shout out, jump up and down and sing along.
The show is on a nationwide tour and was at the Wycombe Swan for two days, running three shows a day. But you can also book to see it in London just before Christmas. 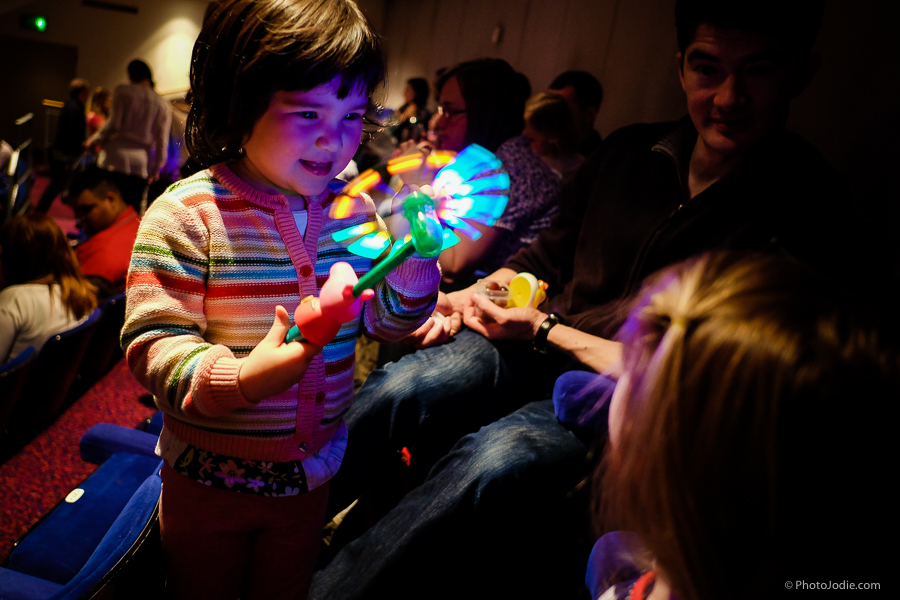 The flashy light thing helped keep them entertained at half time.

Who is it aimed at? 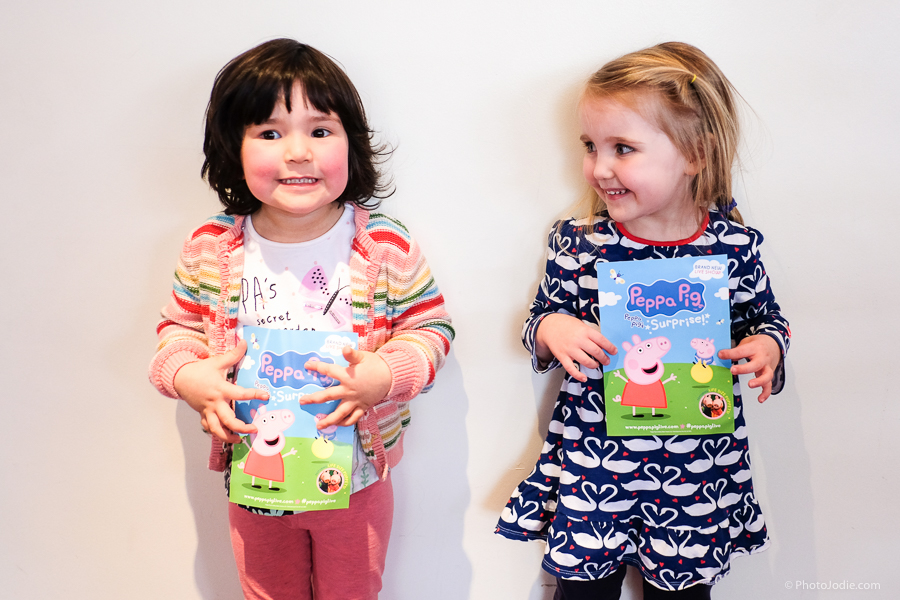 Our Little Lady with her best friend. Both of them aged 3 and half. The show was perfect for them.

I saw toddlers, pre-schoolers and babes in arms who were mostly dragged along for the ride (like our Little Man!) I know a few friends that went and took older 5 and 6 year old siblings and they were concerned that perhaps it might not be their ‘thing’ as they’d grown out of Peppa Pig. No need to worry on that front: the older ones had as much fun as the little ones. 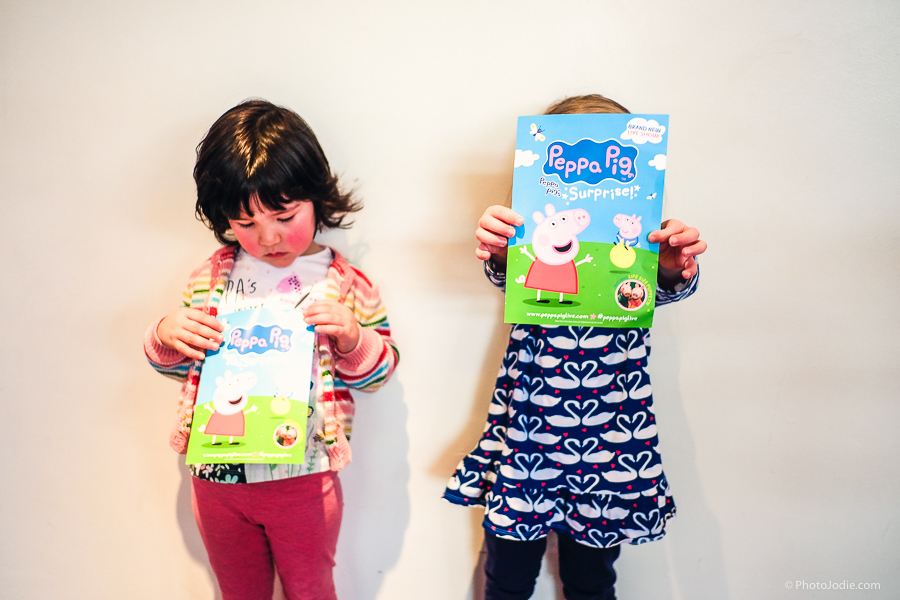 Having fun after the show with their ‘Peppa Pictures’ 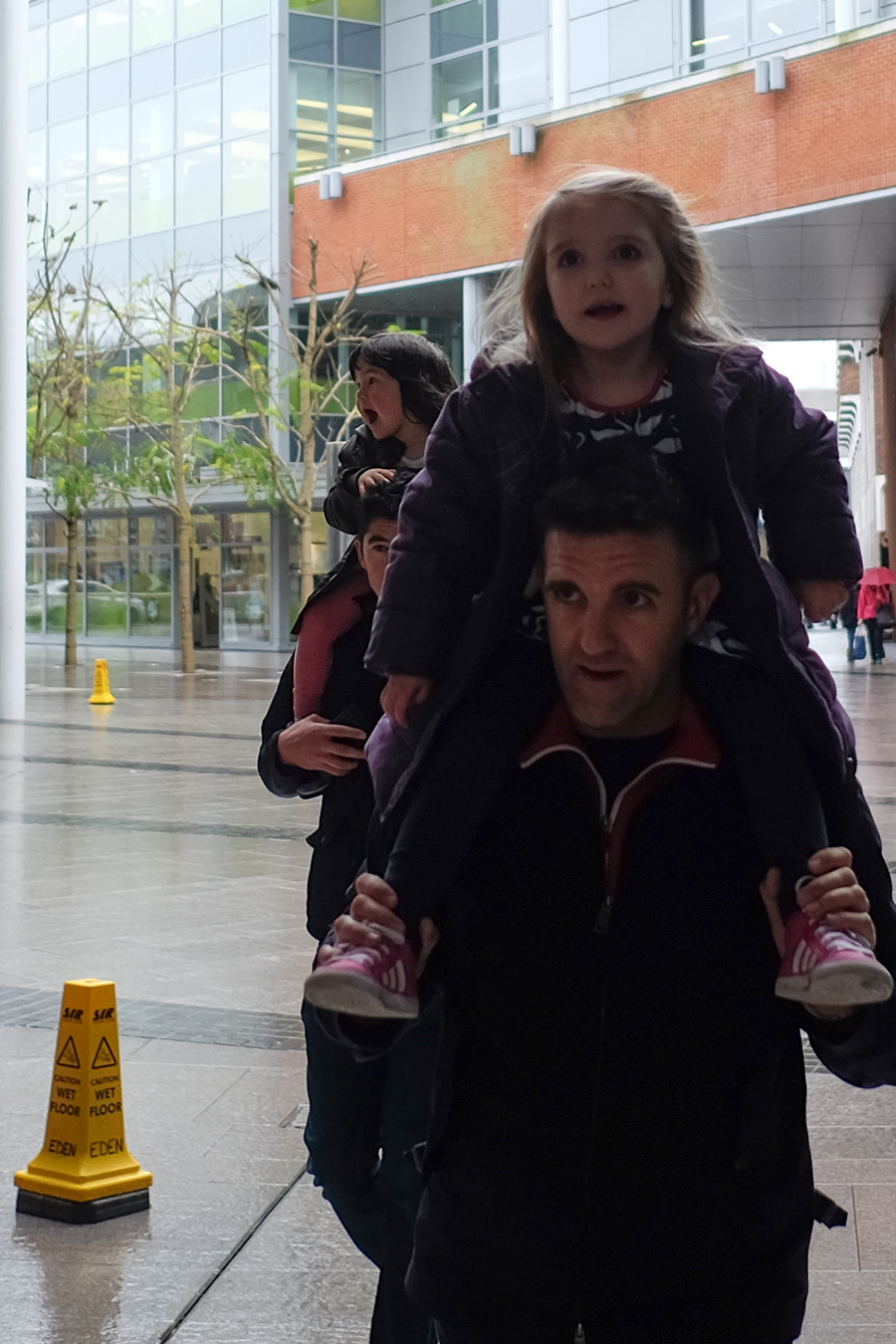 It was Daddies and Daughters Day for us.

Even though I wouldn’t class us as being a ‘Peppa Mad’ household (we don’t have any Peppa Pig Toys or clothes, and she only watches it from time to time) I was pleased to see that she was totally enthralled by it all. I even got a bit emotional as I looked over to Mr H and saw his face as he watched her enjoying the show. This was the first time he’d been with us on a theatre trip and I could see that he was touched to see the real joy on her face. So yes, if you can drag the Dad’s along, it’s worth it for them too! 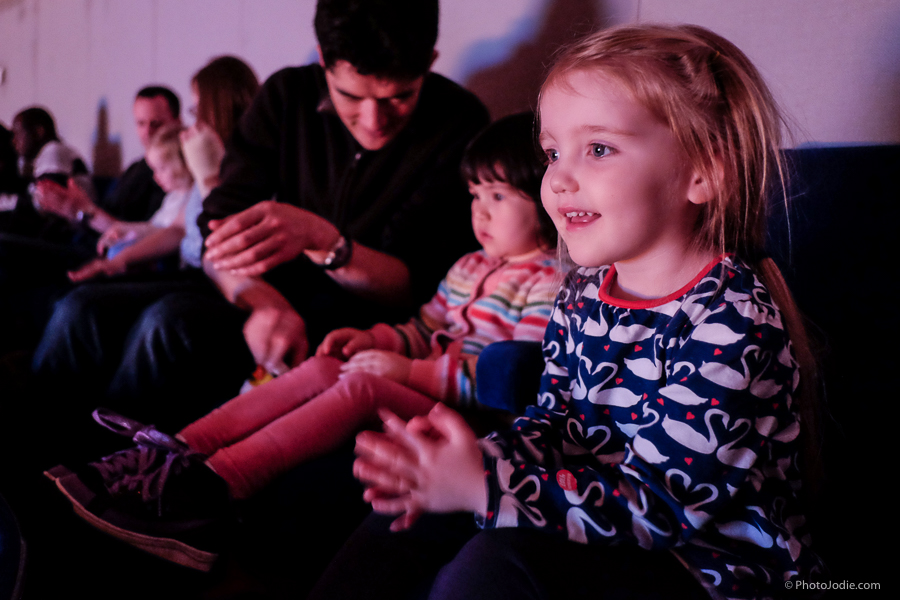 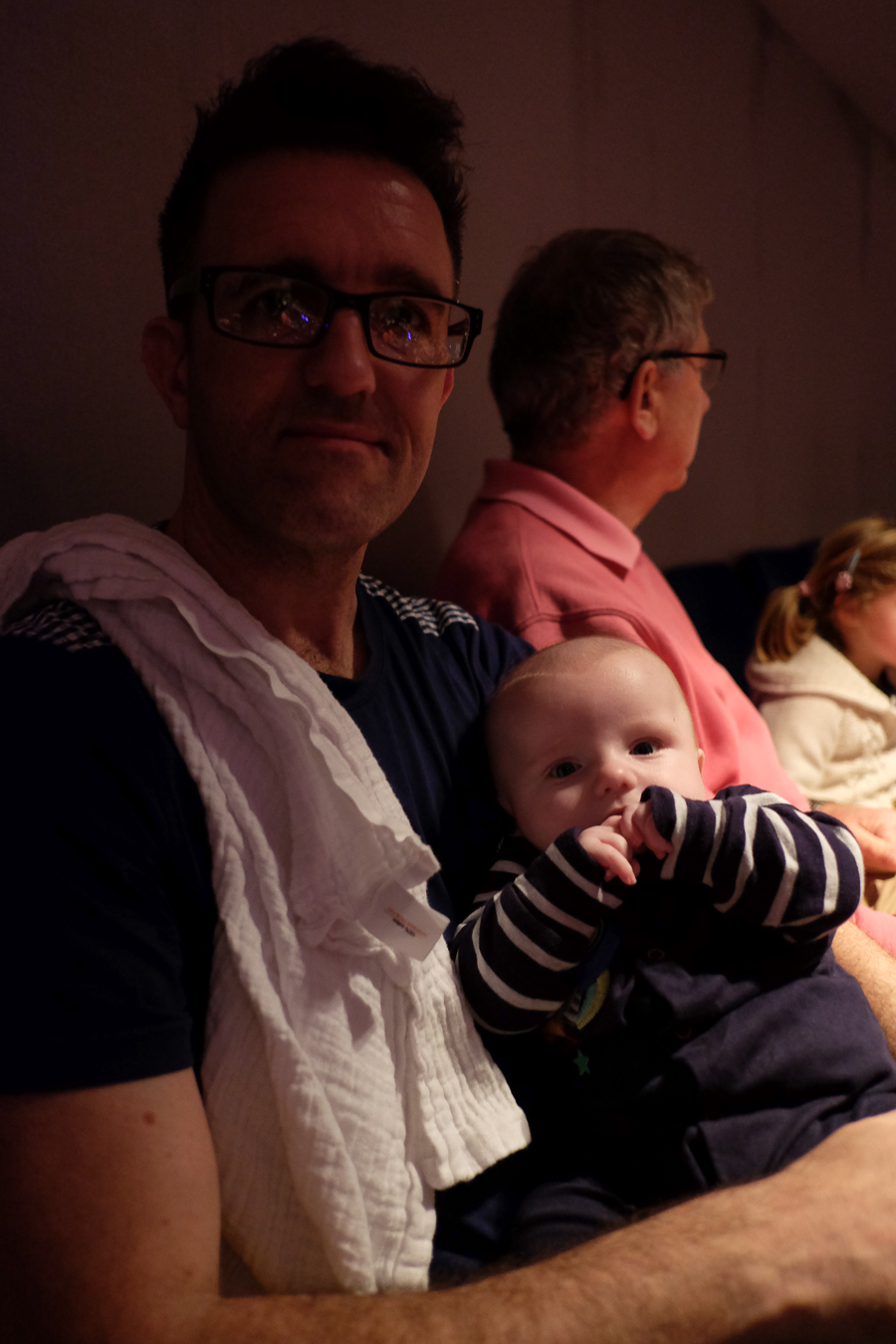 I was glad that the boys were with us too.

Surviving a Theatre trip with little ones 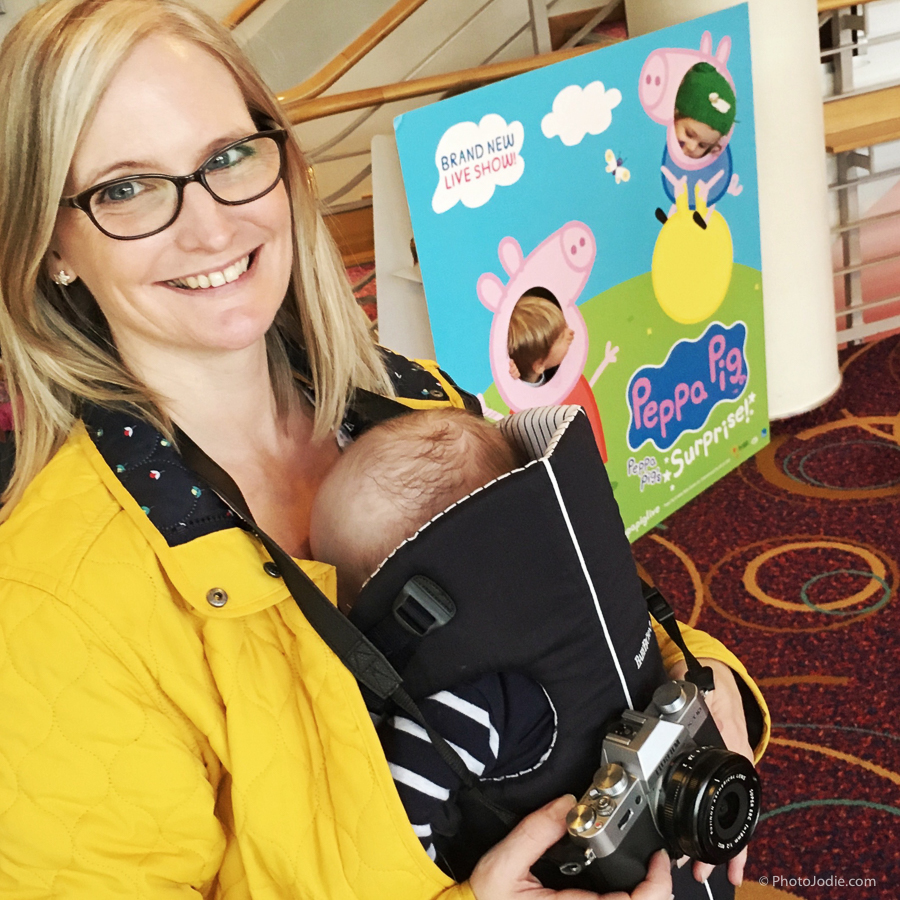 If you’re tempted to take your little ones along to a show like this, here’s my top tips:

Choose the early show
(10 am start). It might be painful, but you’ll be out in time for a nice early lunch.
Grab your tea or coffee before you go.
Epic fail for me here, I thought I’d grab my second cuppa of the morning while I was there but it was all a bit hectic. As you juggle carrying all of your stuff, holding your kid’s hands and step around other people’s kids, the last thing you need to be carrying is a mug of steaming hot coffee.
Allow extra time for parking.
It can feel stressful trying to find a decent space as every other parent is trying to do the same thing.
Bring Snacks!
There was a comedy mass rustle of bags and clicking of Tupperware lids at the interval when everyone bought out snacks and food for the little ones.
Travel light.
Leave any Non-essential clothes or bags in the car. Space at your seat is limited and pushchairs will need to be left outside the auditorium. There is a cloakroom if you want to leave your coat, but it just adds one more thing to do and it’s much easier to keep things as simple as possible.
Choose a back row or end of aisle.
We had a great view at the back, the kids weren’t bothered by it at all and the plus was that when I had to take the Little Lady to the loo in the second half, I didn’t have the guilt of spoiling the view for half the theatre behind us as we walked past. An end of aisle would also be good for this.
Be prepared to spend a little extra.
There is merchandise, and some of it is bright and flashy and Very Hard To Ignore. So you can either deal with an hour of ‘mummy please’ or just accept that it’s a day of treats! 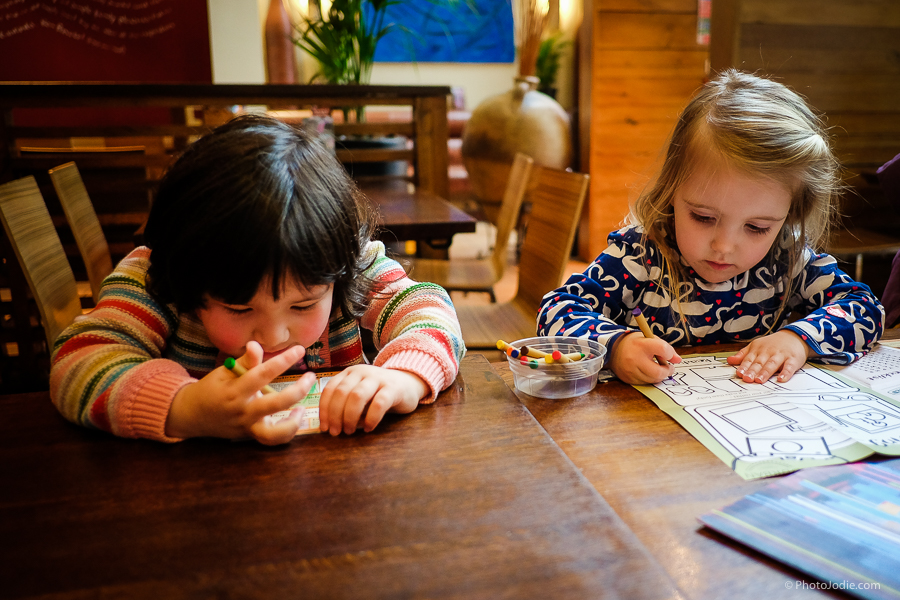 We made it out to a restaurant and were having a lovely meal by 12, just before it got busy! 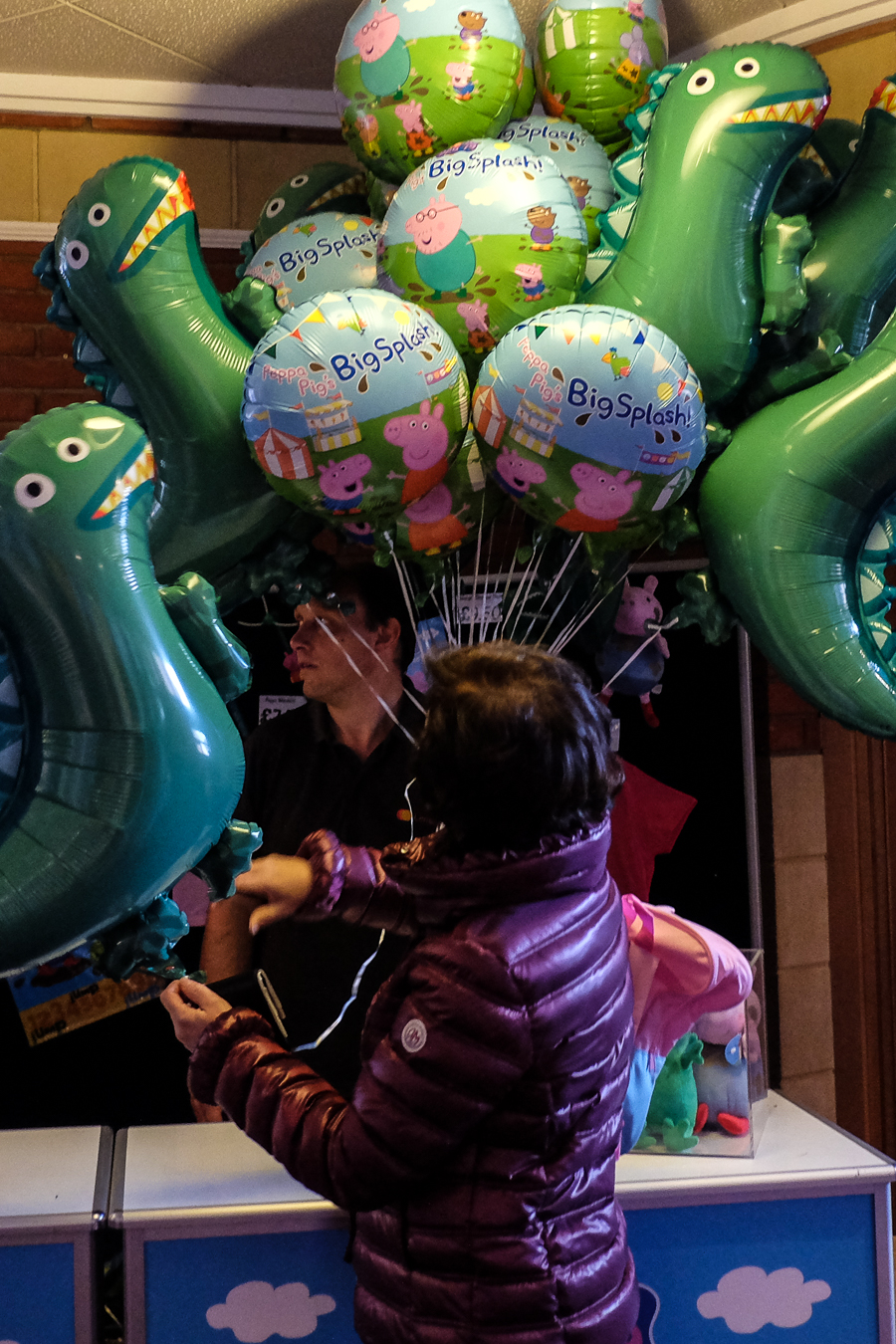 There are balloons for sale on the way out. Just warning you! 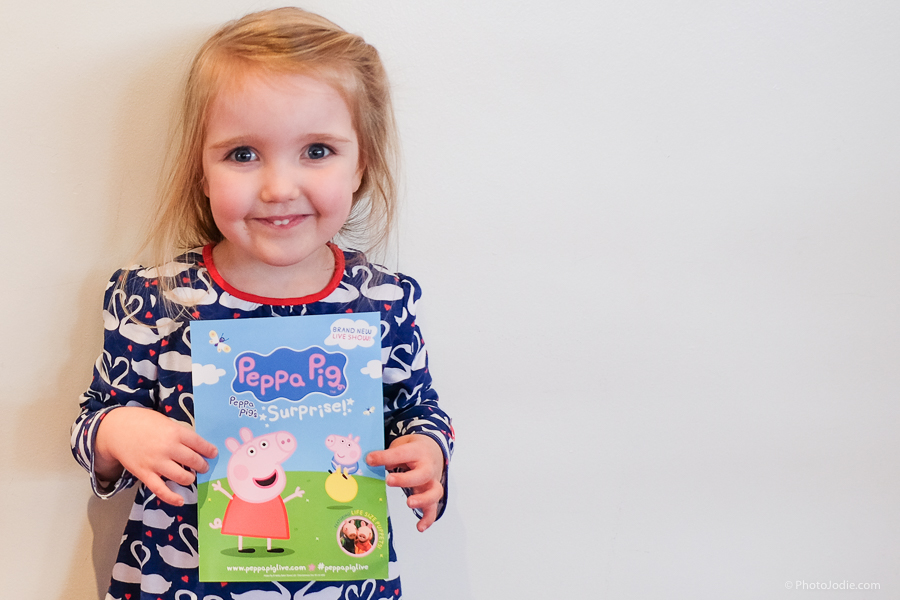 THAT face! I think we can assume she enjoyed Peppa Pig Live!

I was given a set of tickets in return for an honest review on the blog. We had a great time and I’d certainly recommend it to other mums. I’d also happily pay to visit another show like this again. The look on my daughter’s face was priceless. She’s still announcing to everyone she meets that she saw the REAL Peppa Pig at the big theatre! It’s all about creating those little family memories to look back on. 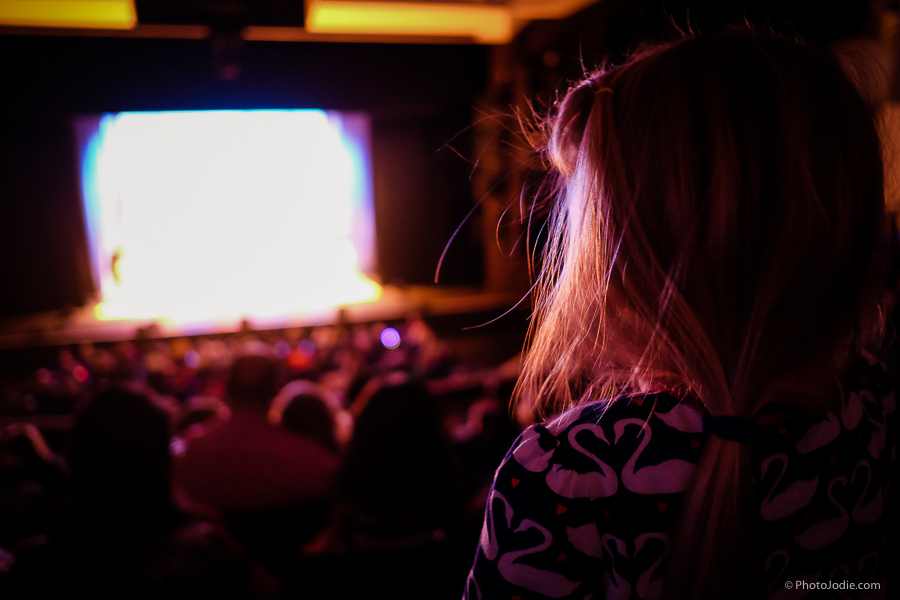 Wearing a Swan patterned dress for her first trip to the Wycombe Swan! 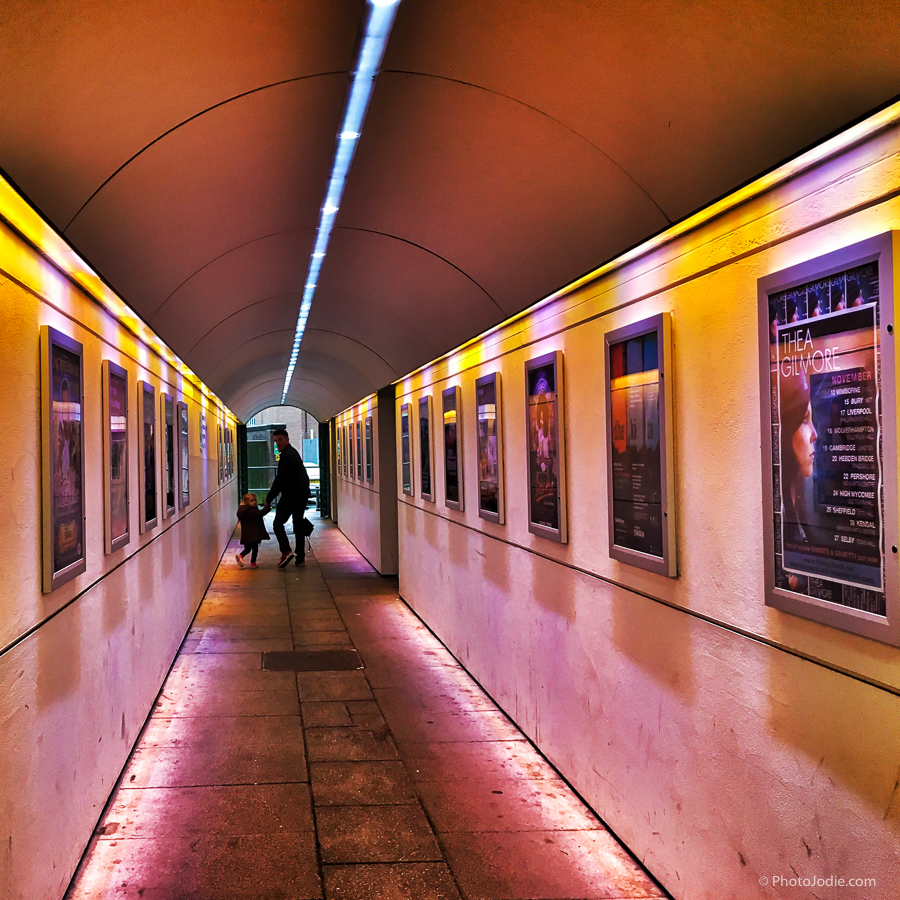 Homeward bound, back to the car after a lovely family morning.