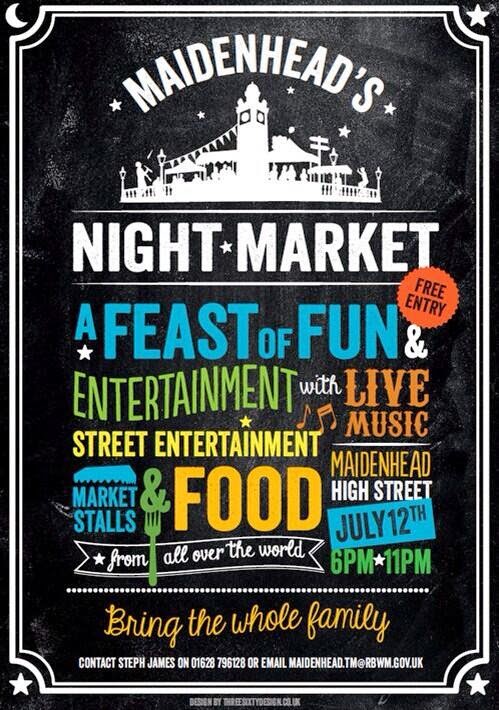 There’s a quiet revolution happening in Maidenhead.
Although on the surface you might only see small uprisings of activity on the High Street and in the Nicholson’s Centre, behind that there is a bubbling undercurrent of….
Town pride.
I kid you not.
This week I’ve been overwhelmed by the outbursts of passion from all kinds of Maidonians about last Saturday’s Night Market.
In case you weren’t aware, the Night Market was an idea that was suggested by local resident Jeff Lloyd for a competition run by the Maidenhead Advertiser for ideas to help invigorate and boost the town. Jeff’s idea was to create a night market, similar to ones that you see in Strasbourg and Barcelona, and invite people down to the High Street to shop, mingle, eat, drink and be merry.
Newspaper articles in the run up to the event said that:
“Residents can expect live music from local band Money on the Drum, stilt walkers and street entertainers, funfair rides from Traylens at either end of the High Street and a wide variety of food stalls featuring local traders and those from further afield.”
The coverage in the paper was accompanied by a quote from our local councillor:
“Cllr Natasha Airey, who is acting as Jeff’s mentor and sat on last year’s judging panel, said: “This is great example of the Big Society in action – giving residents the chance to come up with innovative ideas to help improve the communities where they live.”
It’s fair to say that there was a lot of anticipation for the event.
Having been at the successful fireworks night back in November which saw the high street and the town centre packed with people, it definitely seemed worth checking out. So together with our little lady and friends who have a little lady of a similar age, we headed down at around 7pm.
I’ll let the photos do some of the talking… 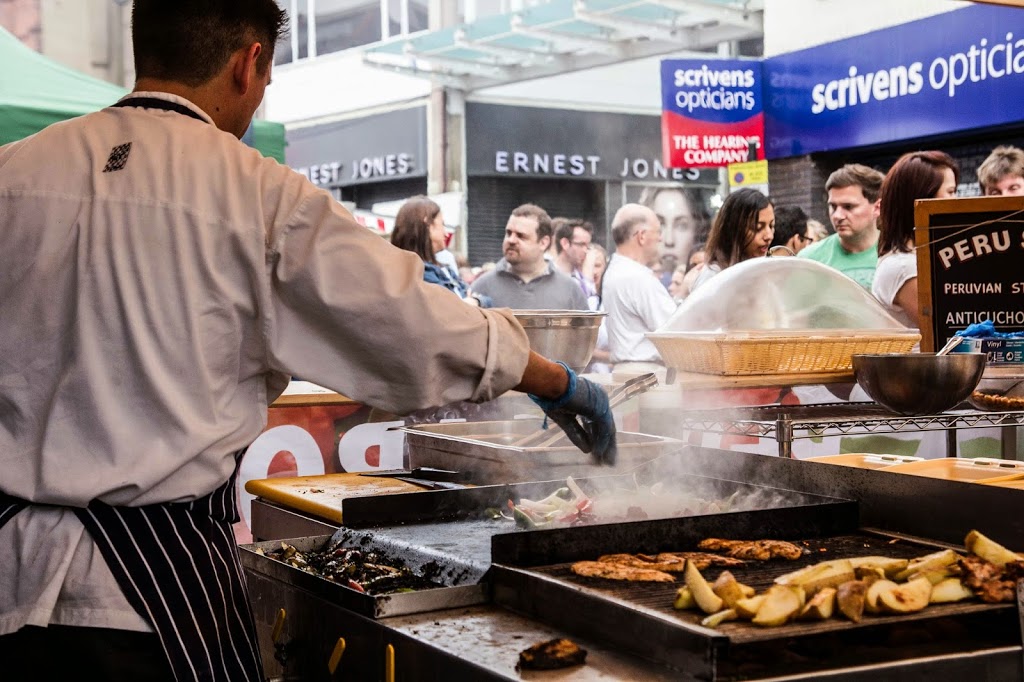 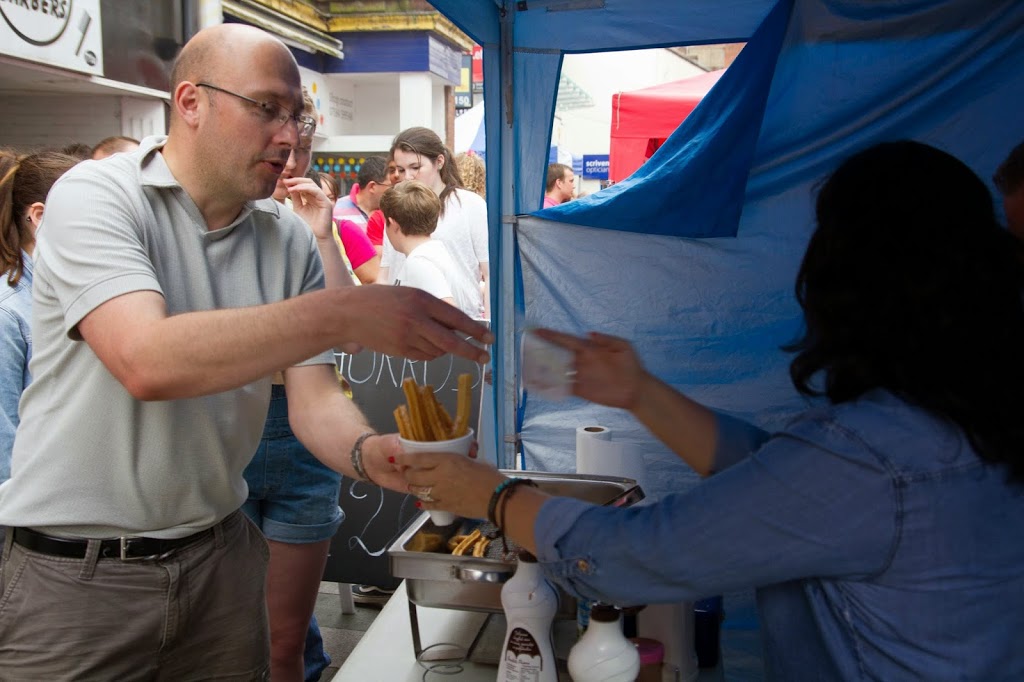 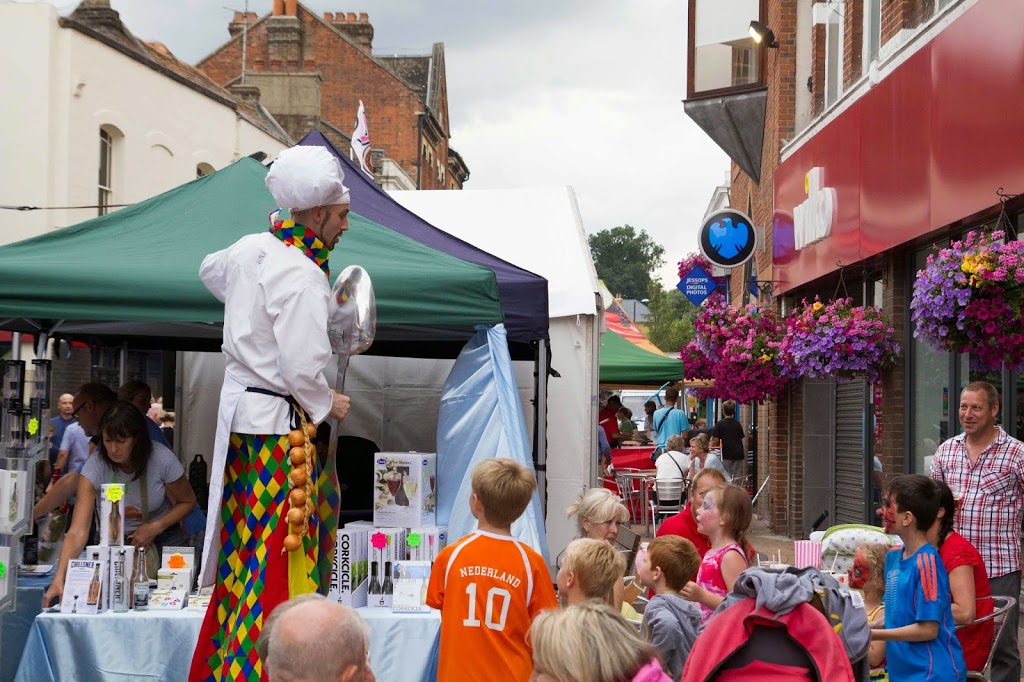 So what did I think?
There’s no denying that it was great to bump into neighbours and familiar faces and actually talk to them, as opposed to just rushing past in town. And there was a sort of relaxed, kids pottering around freely like they would on holiday kind of feeling. But as I walked home chatting to our friends, I couldn’t help but think that we’d been a little short changed. Where was the fair? Where were the varied stalls and stands? We’d even double checked around the corner by the Town Hall before we left, just in case we’d missed something!
After putting the little one to bed I then found myself on the internet, and on Facebook (I know, I know, I’m addicted, I can’t help it!). But what was amazing to see is that whilst the Night Market itself hadn’t quite hit the mark, it had united a large part of Maidenhead on social media as they came forward to share their views and offer suggestions. Town-pride-tastic (new word!).
By 9pm on Saturday night, a comment posted by a local mum in the popular Facebook group ‘Maidenhead Gossip Girls’ saying she had felt let down by the market, had over 70 people replying with a comment within a few hours. That’s the kind of social media engagement rates that Marketers dream of! But unfortunately that’s representing a lot of disgruntled local ladies.
People felt that the market fell short of the vision that had been painted with such a small variety of food stalls, no local craft stands, and nothing to do for the kids apart from a rather lovely volunteer lady who was doing face painting. Although McDonalds were doing a roaring trade!
Maidenhead isn’t a big place, so I’m sure that a lot of this feedback has already found its way back to the organisers and to Jeff Lloyd. But I decided to go one step further and asked the ladies of Maidenhead for any other feedback about the event so that I could share it with this blog post and hopefully it could be used proactively for future events.
I was overwhelmed by the responses.
Here’s what everyone seems to agree on:

I hope this post has been a fair summary of the event and the passions it seemed to ignite.

Here’s hoping that we’ll see another (new and improved) night market in time for Christmas with the words ‘back by popular demand’ on the posters!
Over to you… What did you think? Feel free to leave a comment below.
If you’ve enjoyed reading this post and want to read my blog on a regular basis, you can follow me on Twitter or Facebook , visit my website www.maidenheadmum.co.uk or you can use the boxes on the right hand side (on desktop) or at the bottom of the screen (mobile) to subscribe and get my posts sent to you by email.