Starting school in Maidenhead: your child’s place is confirmed, but what next? 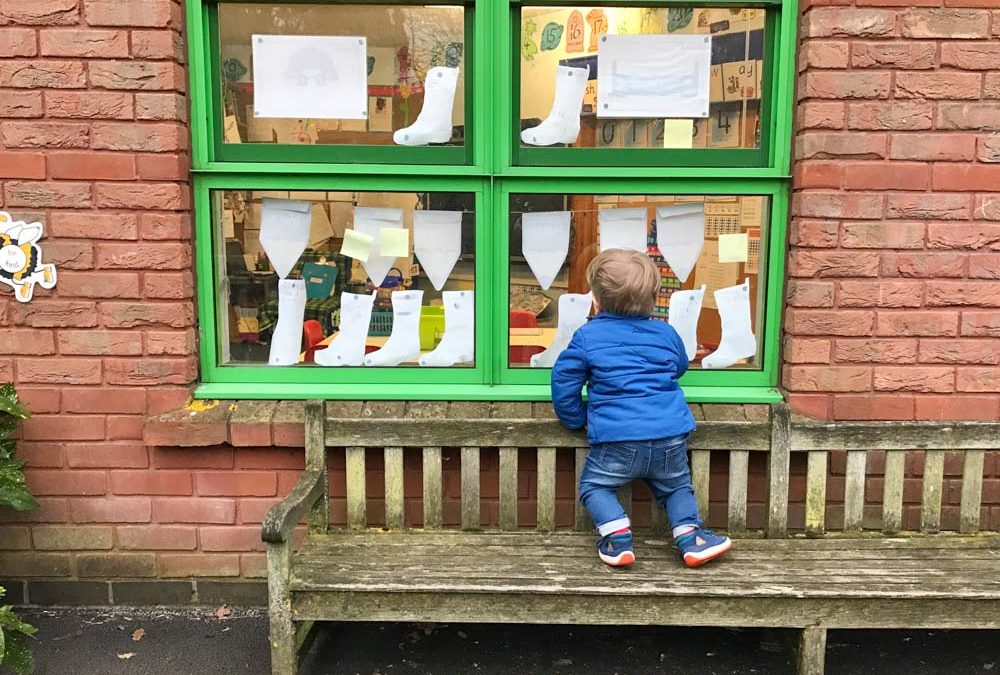 If you’ve had the email this morning to notify you of a school place for your soon-to-be primary school child, then you might be wondering what you need to do next. If you’re anything like me, the urge to go and buy a new pencil case and pens for them will be overwhelming, but the reality is that you don’t need that at all for primary school children. So, I’ve pulled together a post with some tips on what you need to do to get prepared, and where you can find some of these things in Maidenhead.

But before I start chatting about where to buy school uniform and school shoes in Maidenhead and the surrounding area, I thought I would start by acknowledging some of the emotions you might be feeling now that it’s official your little one is starting school and you’re graduating to be a ‘first time school mum’. (It’s a Big Deal for kids and grown-ups alike!)

Dealing with the emotions (yours more than theirs!)

I’ll start by confessing that I felt A LOT of emotions the first time around when my daughter was due to start school for the first time. This year she will be moving up into the next school, and her little brother is the one that will be the ‘newbie’. Although technically I have been through all of this before, even as a ‘second-time’ school mum, the thought of the first day of school for my son is still something that can make me catch my breath. Is he really that grown up already?! 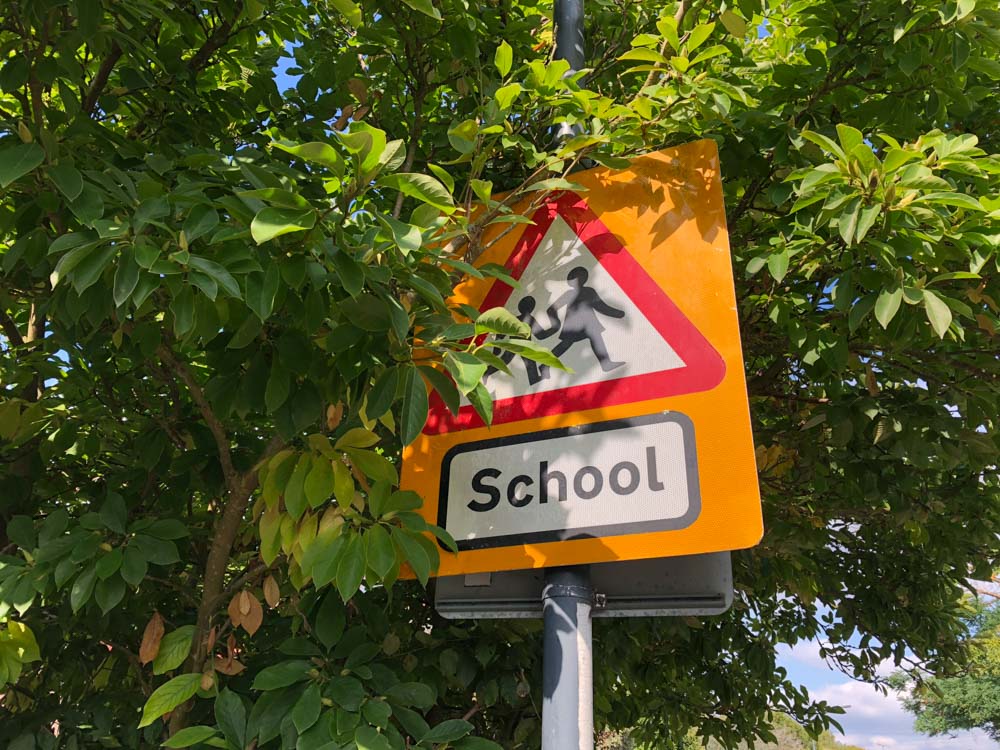 Technically I should be a pro at managing the emotions by now. I’ve been through the ‘starting school’ process with my daughter and know that everything will be fine. Yet despite this, there is still a part of me that worries about my son starting school. As a late July baby, how will he cope in school with the other children, some who will be nearly a year older than him when he starts?

For all his noisy bravado and hilarious antics, he is my little man. The one that kept me in hospital for over a month before he was born because the risk to either of our lives was too high to let us continue the rest of my pregnancy without immediate medical support on standby. My little man that had breathing difficulties when he was born and had wires and equipment attached to him in the special care baby unit at Wexham Park. With starting school on the horizon, I have to acknowledge that he isn’t that little any more. Now affectionately known as the ‘Boynado’, or the ‘Boynami’, he is the whirlwind of activity that spins through our lives in a riot of noise, action and genuine delight at anything ‘stinky’ and ‘bum’ related.

Even though part of me hopes that as the second child going to school he will be fine: we’ve all been on school run together most days, and he is already the ‘boss’ of the playground knowing the best places to hide, run and jump. Deep down I know he might still cling to me like he does when we leave him at nursery…and that I might suddenly find something in my eye as I wave goodbye to him at the school gate! 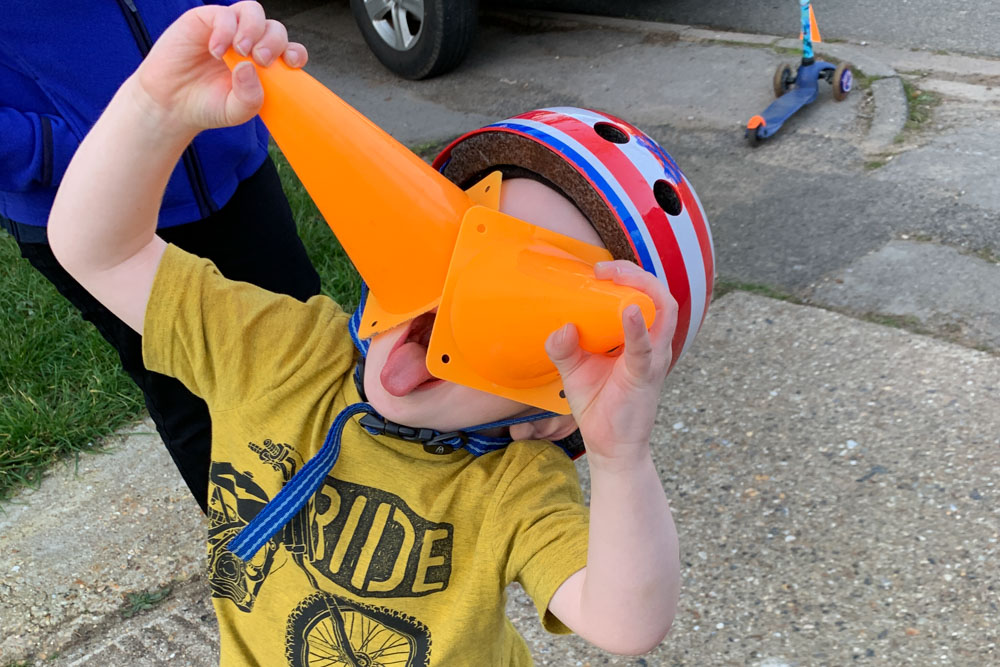 So while I can’t really declare myself qualified to dish out advice on avoiding the emotions of being a first-time school mum, what I can do is round up some of the things that I’ve learned about being a primary school mum over the last three years in Maidenhead.

Getting ready for school – what you’ll need to buy.

Let’s go back to that shiny new pencil case, pens and bag. Stop right there. They won’t need that at all at primary school. Instead, you’ll have a list of uniform that you need to get. Depending on your school, you can buy uniform from high street retailers, supermarkets or specialist uniform retailers that have been licensed to sell the correct uniform. My big learning curve was that school uniform seemed to be sized much bigger than standard clothes. We ended up with a school skirt for age 2-3 when my four year old daughter started so make sure you give yourself some time to try things on.

Where to buy school uniform in Maidenhead?

Here in Maidenhead, we have Goyals, which is a family run business and has been a rite of passage for Maidonians for years. Seema Goyal and her team stock uniform for schools all over the borough and are experts in all the things you’ll need to start school. So much so that you can walk in without a list, tell them which school your child is going to and they will know what you need. Magic. The only downside to this is that they can get very busy at peak times (don’t leave it till the last day of the school holidays!). Buy a little earlier, and they offer an exchange if you need to swap before they start school.

Aside from Goyals, you might also be able to pick up other bits of school uniform from high street retailers. Marks & Spencer in Maidenhead has many of the basics (grey trousers, skirts, white shirts and polo shirts etc.). In the summer months, they usually offer a discount of 20% to encourage you to shop early – this is the one and only time they discount school uniform so make the most of it when you see it.

Many of the supermarkets also sell school uniform, and we have had dresses and skirts that have lasted well from Tesco and Sainsburys. Each shop seems to have a slight variation on patterns of summer dresses so you might want to check with your school before committing to buying lots of uniform from them.

Having bought white polo shirts from supermarkets, high street shops and Goyals, I can confirm that the ones from Goyals are the ones that wash the best and need the least ironing which has totally justified spending a little bit more on them! 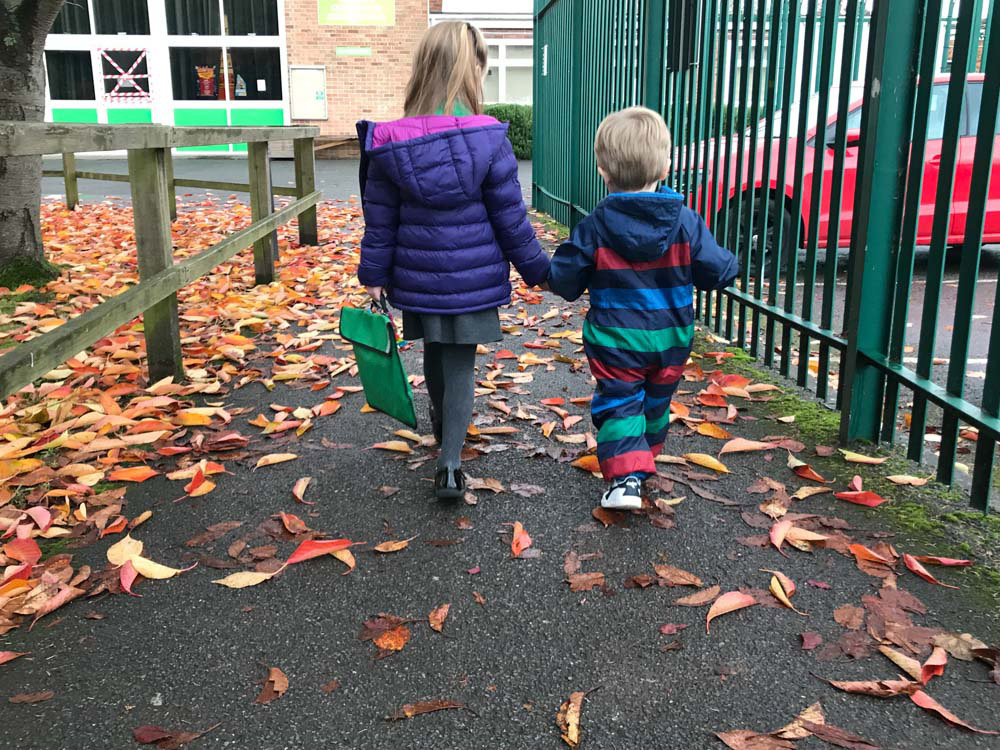 Where to buy school shoes in Maidenhead?

Ah, school shoes. A rather joyless but essential shop. What are your local options? We have a branch of Clarks in town who have trained fitters on hand to help and they have a ticketed system in peak times. We discovered that my daughter needed shoes with a bit more support than the styles offered at Clarks and so after chatting to a local children’s physiotherapist to check that there weren’t any underlying issues with her posture and gait, we were advised to go to the Little Shoe Company in Marlow. They stock brands from Europe which are excellent quality and shape and priced similarly to the main children’s shoe retailers. The price of children’s school shoes still makes me wince, (her shoes cost more than many of mine!) but children wear school shoes day in, day out, so it’s important to get things right.

You could also go to Windsor where Johnsons Shoes have trained fitters and sell a wide range of brands for school shoes. The children’s shoe section in Daniels no longer exists (but the staff get people going in every year to ask!) Over in Slough there is a Clarks discount shoe shop which sells school shoes and all of their staff are trained fitters too.

Some of the schools have after-school activities, but some of these don’t start immediately, some start in year one. Wise Owls offer a breakfast club and after school pick up from many of the local Maidenhead schools – get in touch with them as soon as you have your place confirmed as they are very popular.
We found a local childminder who has a child at the same school and she is AMAZING! I really liked the idea of my little ones going back to a home environment after school, especially as they are both relatively young in their school year. We found her through asking in Maidenhead Gossip Girls Facebook Group so it’s worth asking around to see what options are available. I know many mums that couldn’t get their first choice of after-school care and that it was a huge stress trying to make it all work…but the reality is that you do find a way, just try not to panic. It’s amazing what can be done if you chat to friends and ask around – you can often make some short-term arrangements while you wait for a place to be confirmed. Your new found mum friends are your saviour here so don’t be shy!

The things that aren’t on your school list but should be.

So, you’ve got a uniform and shoes sorted, and you don’t need to buy a pencil case or bag… so what else could you possibly need?

These may seem like random suggestions, but trust me, there are usually several non-uniform days throughout the year which usually require one of the following:

Red clothes: Children are often invited to wear something red for Comic Relief, Sports Aid and various other charity days so the next time you spot a red t-shirt, put it to one side.

Something spotty or stripy: This is usually the request for Children in Need and in reception when I was caught short without anything spotty I sent my daughter to school in a white t-shirt that we stuck round stickers all over!

A world book day costume: This event seems to get bigger and bigger each year, and this year you could buy costumes in all the big supermarkets locally. Don’t feel pressure to buy a whole outfit for one day. The spirit behind the day is to encourage children to read more books and be inspired to find out about other books, so this costume can be something home-made or ‘home assembled’ (I’m terrible at sewing!).

I hope this has helped answer some of your questions and thoughts about your children starting school. And if you’ve been feeling a tiny bit apprehensive about how you’ll all feel on that first day, I hope this post has reassured you that at least you’re not alone. They’re starting a whole new chapter of their lives, and you are too so remember to put your brave face on, smile lots, and make lots of new friends! 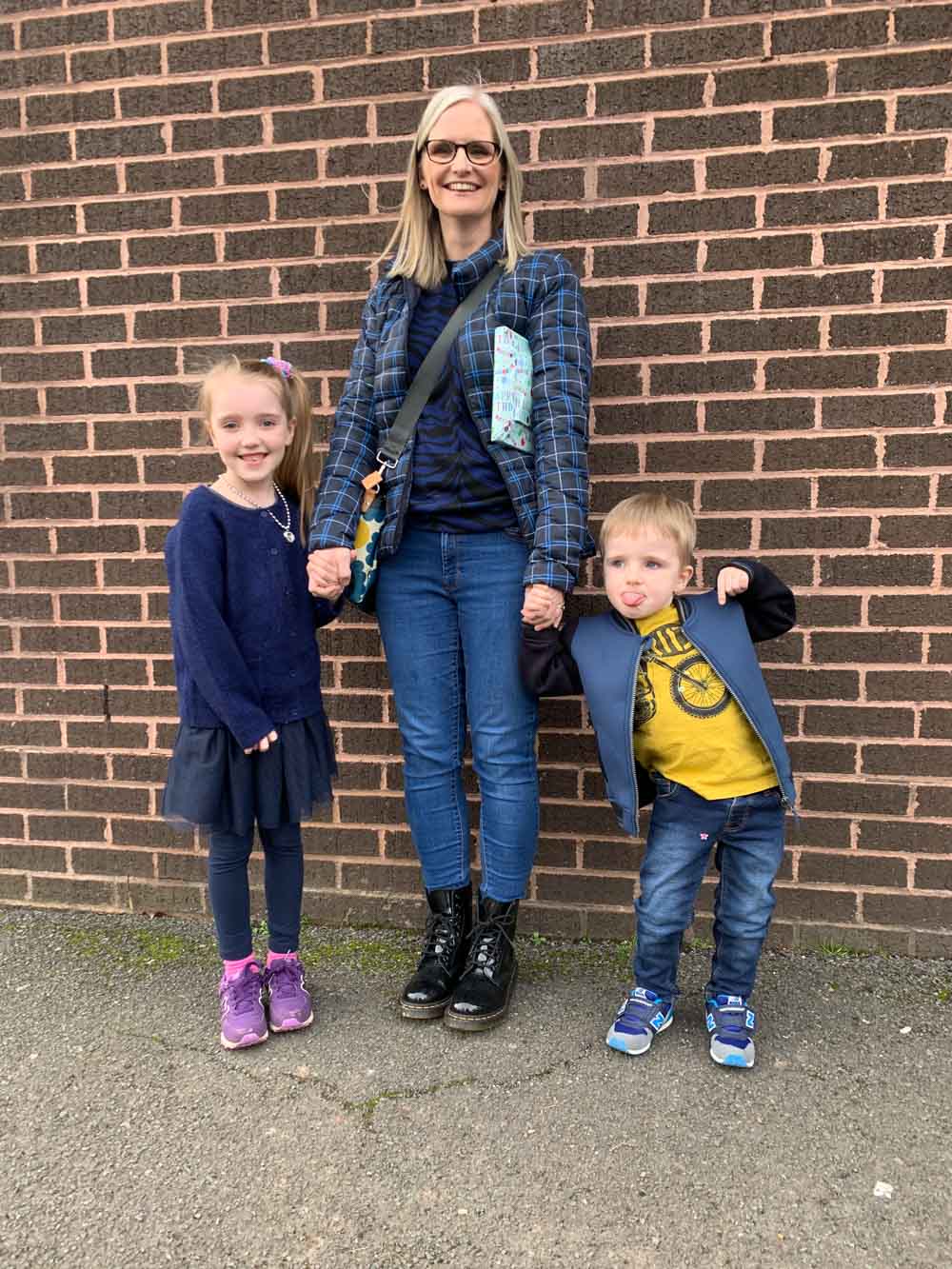